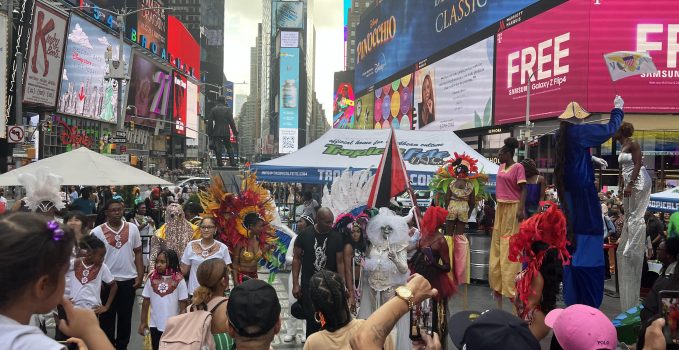 Before the festivities got under way, Miss New York USA Heather Nunez and celebrity host Todd Wharton popped into Tropicalfete’s Caribbean Carnival in Time Square. She spoke about domestic violence as part of her platform and the upcoming pageant where she will be representing New York at Miss USA 2022 to be held in Reno, Nevada, on October 3 Miss New York USA Heather Nunez got to play steelpan with Nature Fortune, one of Tropicalfete’s young members. She took the time to recognize the importance of diversity and inclusion as a child of immigrant parents from the Dominican Republic.

Tropicalfete brought the magic to New York City’s epicenter, Times Square. With its exuberant events like Jazz in Times Square and its annual ball drop celebration on New Year’s Eve, the historic landmark is regarded as the liveliest location in New York City. Bars, restaurants, theaters, museums, and a terrific atmosphere can be found at Times Square. Manhattan’s Times Square is its beating heart, making New York City the capital of the world. Tropicalfete is on the front line of advancing Caribbean culture throughout the year. Tropicalfete having this event in Times Square, which is known as “The Crossroads of the World,” is a fantastic way to honor our ancestors that built a foundation for Tropicalfete to stand on. The event also has additional significance as Tropicalfete is designated by New York City as part of the Coalition of Theatres of Color (CTC). The audience got a taste of Carnival Street Theatre. Traditional carnival costumes such as King Jab, Midnight Robber, Dame Lorraine, Flag Woman, Sprit of Carnival, and Blue Devil, as well as modern-day carnival with feathers, moko-jumbies, and steelpan, made Times Square their carnival stage.

Authorized Caribbean Life to use the photos below. 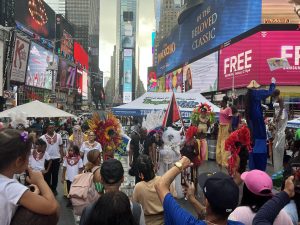 The Climax of a wonderful day of Carnival Culture in Time Square. 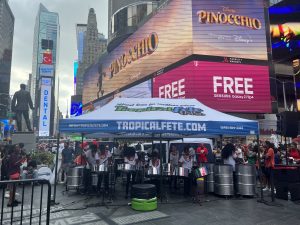 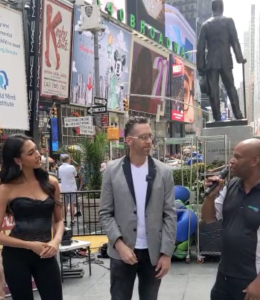