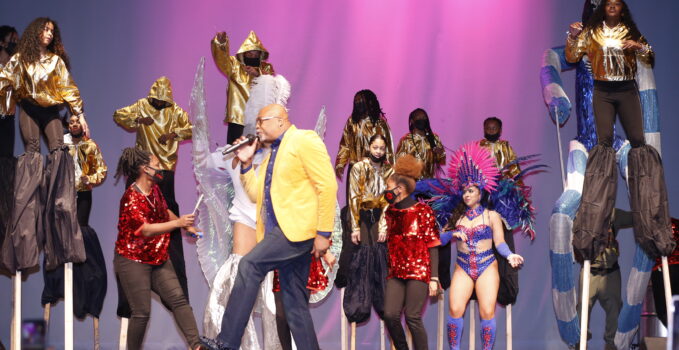 After much dedication and hard work, Tropicalfete Inc. ended 2021 on a high musical note.  The event was held at the BMS Playhouse Theater and was well attended by an appreciative audience. This annual end of year concert which is Tropicalfete’s free musical gift to the community was very spectacular allowing the organization to take their final bow for 2021.

The Trio – Vocalist – Kayla “Devine Lotus” John, Bassist – Collin Holder, Keyboardist – Henly Goddard who were the opening act delivered a harmonious performance with a soulful touch.  Pannist Ricardo Greenaway entertained the audience with the sweet melodious sound of the steel pan.  Mr. Lonesome had the crowd dancing to his very popular parang tune “I Ain’t Goin” which was arranged by Frankie McIntosh.

Tropicalfete’s Voices choir group was not at full force in terms of numbers because of the COVID protocols. Nevertheless, Gayrleen Orange represented the group scored a homerun with her singing getting a standing ovation.

Anslem Douglas performed three songs in his set. “When ah dead bury me clothes” was one of the tunes performed by musician Anslem Douglas that had the entire crowd on their feet dancing away.  Then next was super-talented Tropicalfete’s Stilting Unit, Mas and Theatre under the leadership of Charles Watts, Roshumba Marcelle and Caitlyn Pierre who put on an exciting performance.  After five minutes of performance the stilt dancers were joined on stage by Anslem Douglas who sang the very popular “Doggie/Who let the dogs out” with a new twist “Who let the jumbies out.” While everyone was dancing, chanting and wondering “Who let the jumbies out,” the tallest masquerader Saga Boy who was portrayed by Victor Estrada also joined Douglas and the stilt dancers to put on a memorable performance.

This exciting display of skill was followed by the awards presentation.  Tropicalfete Award of Excellence was presented to Vincentian-born Franklyn “Frankie” McIntosh, musical arranger, composer and producer.  McIntosh is renowned for arranging music for Alston ‘Becket’ Cyrus, Shadow, Chalkdust, Calypso Rose, Singing Francine, Lord Shorty, Winston Soso, Duke, Marchel Montano among others.   Trinidadian-born Anslem Douglas musician and composer best known for his hit tune “Doggie/Who let the dogs out” was also presented with the Tropicalfete Award of Excellence.  Douglas has a number of awards under his belt including a Grammy award. For the past several years, he has continued to perform, record, and write songs while also focusing on other pursuits, including writing his first children’s book, The Adventures of Spin & Scratch-The Relocation.

This year’s college scholarship was granted to Nazyia Bembry because of her dedication, passion, love and respect to the arts.  Bembry is always willing to learn, teach and assist other students whenever the need arises. She was presented with an award, a check for $1,000 and a bag pack full with her Tropicalfete gear. Mr. Ralph Bisceglia generous donation to Tropicalfete’s mission  made the college scholarship possible.  Bembry is attending New York  City College of Technology.

Then it was the turn of the elegantly dressed and enthusiastic Tropicalfete’s Steel Pan Ensemble to display their talent.  Under the leadership of Ashley Murray, they never disappoint.  They put on a brilliant performance that had everybody going wild especially when they played their final piece “Jerusalema.” Anslem Douglas join the TFSPE on stage and sang Winter Wonderland while the band  was play.

While Tanisha Burke the hostess engaged the audience, SB Sounds the DJ and Eryk Sonny the sound engineer of Natural Sound also kept the them musically entertained.

The conversations after the final performance were very positive.  Mrs Pottinger said “the event was wonderful, she enjoyed every mminute and is already looking forward to the next event.”  First time attendee, Miss Spencer has vouched that she will be present at all Tropicalfete events because that is the best show she has attended for the year.