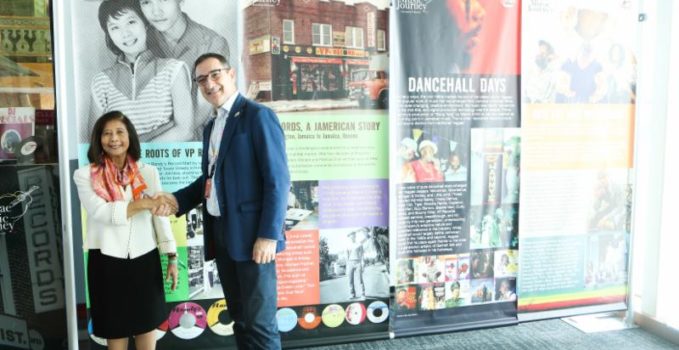 JOIN VP RECORDS FOR THE UNVEILING OF

“Our celebration of VP Records’ 40 years in America, has coincided with the citation from UNESCO that Jamaican reggae music is an intangible cultural treasure,” said Patricia Chin. “This exhibit represents our shared heritage and some of the glorious achievements of reggae music. My hope is that all who visit our Reggae Music Journey will be inspired to strive for even greater things.”

The exhibit, which is in the departure terminal, will remain at Montego Bay’s Sangster International Airport until June after which it will move to Kingston’s Norman Manley Airport. Curated by Carter Van Pelt, VP Records’ Director of Catalog Development, the exhibit consists of three separate displays that extend from the food court through Gates 12 and 14.

“Each year Sangster International Airport welcomes millions of travelers from across the globe, and it is with immense pride we present ‘A Reggae Music Journey’ so all visitors to Jamaica can see and experience VP Records’ contribution to reggae music,” said company president, Randy Chin. “From Randy’s Records to some of our biggest hits and more, we’re proud of these accomplishments and it’s all here for the people to soak up.”

Featured material includes details of the company’s beginnings in Kingston, Jamaica to the establishment of VP Records in Jamaica, New York. Fans of the label’s compilation series, Reggae Gold, Soca Gold and Strictly the Best will see the development of these individual projects over the years.

Artifacts including vinyl records, CDs and a platinum sales award for Sean Paul’s Dutty Rock LP are also weaved throughout the exhibit. Some of the genre’s most admired artists, including Beres Hammond, Sanchez, Luciano, Garnett Silk, Lady Saw, Freddie McGregor, and Dennis Brown who have had key releases distributed by VP Records are featured in the exhibit as well.