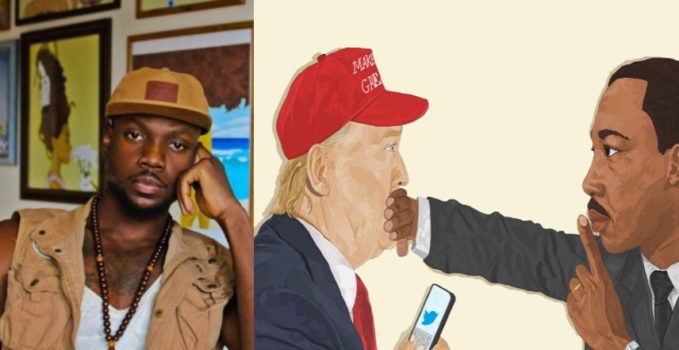 Tropicalfete, Inc.  Award  of Excellence this  year will be presented to Haitian American Painter Watson Mere that did the iconic painting “My Brothers Keeper” of Martin Luther King Jr. and Donald Trump that took the internet by storm. His Art work has been featured on MSNBC, PRI Media, and Washington Post to name a few. The award will be presented to Mr. Watson on December 16th at Brooklyn Music School Playhouse Theater during Tropicalfete Final production for the year the Finale. Our event is a show where the audience become part of the entertainment, Tropicalfete Stilts, Steel Pan, Dance and Singing group will be performing. Also part of the entertainment cast is a live band and local artists. This is a free event for the community.  https://www.facebook.com/events/251541118886456/

About Watson Mere: Watson Mere, an artist of Haitian descent with no formal training in art, has been creating art since he was a young child. Until age four, Watson experienced a delay in his speech and could not verbally communicate. His teachers introduced him to art in order to help him fully express himself. This was his beginning. When Watson was 11, he was introduced to the computer program, Microsoft Paint. This became his medium.  Watson finds inspiration from the love, struggles, happiness, and pain of the people of the African diaspora. Each piece is designed to spark the viewer’s imagination as to interpret the work of art that stands before them. With the screen as his canvas and the mouse as his “brush”, Watson meticulously transforms social issues like race, poverty, and religion into extraordinarily rare and unique works of art. This is his passion. “I hope [my art] allows people to think. I want to inspire them – make them contemplate something. I want to give people something to consider that they don’t see on a daily basis. I want to help them think and use their imagination.”

Troipicalfete Award of Excellence honors the accomplishments and contributions of persons and/or organizations that have had a role in the development of the Community. The achievement of the awardees is significant on an international level where their work had a positive impact to the Community in the areas of culture, social, sports and economics. Past Awards were presented to:  2009 Mark “Mad Stuntman” Quashie – Artist – I Like To Move It 2010 Michelle Anglin – Play Writer – I Lost My Heart in Haiti  – 2011 Patricia Meschino, – Journalist Caribbean correspondent for Billboard Magazine.  – 2012 Diosa Joseph – Tropicalfete Member  – 2013 Richie Richardson – Visual Artist  – 2014 Reggae Retro – Longest Running Reggae event in New York City – 2015 Mervyn “Dr. Witty  Carter – Calypsoian  – 2016 Roger Meltzer CEO and Director of A&R Capsicum Records, LLC / Music Producer  – 2017 Gentle Benjamin – TV Producer and Cultural Historian