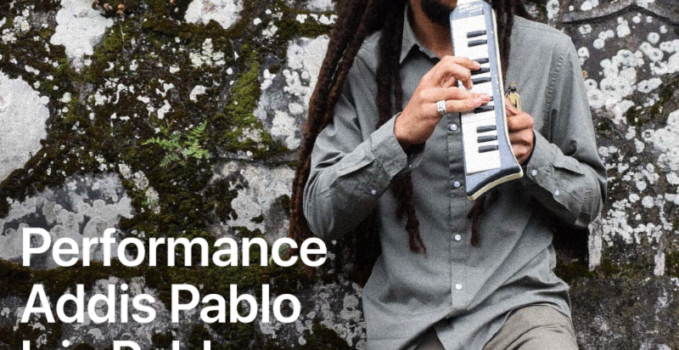 Today at Apple will present a live performance and interview with Addis Pablo and Isis Pablo to celebrate their father’s recent birthday (June 21st) and musical legacy with a performance at the Apple Store in Williamsburg (Brooklyn) this Thursday June 28th 7:30pm-8:30pm.

The performance will include a set that honors Augustus Pablo vast catalog, and the reissue of his hits Eastman Dub and Let’s Get Started. They’ll wrap up the session with an audience Q&A.

Melodica player Addis Pablo has been honoring his father’s legacy from Jamaica to the world, while creating his own as a young and emerging talent. Pablo produces his own music and has opened for major festivals including Reggae Jam and Berlin Reggae Vintage Night. 2017 marked the release of “Riddimentary: Suns of Dub Selects Greensleeves” from the collective, Suns of Dub which he is apart of. He also performed a special Greensleeves concert at the legendary BB Kings venue.

His sister, Isis Pablo has a worldly taste palette in her music selections and productions including dancehall, trap, afrobeat, hip-hop, and electro. She curated a roots-reggae mix for Radio Kangol.

“We are very excited to honor the legacy of Augustus Pablo with this special performance,” said Ted Ganung, project manager at VP Records. “Both Addis and Isis Pablo are true talents that keep his legacy going strong and we are excited for everyone to come out and have a great time.”