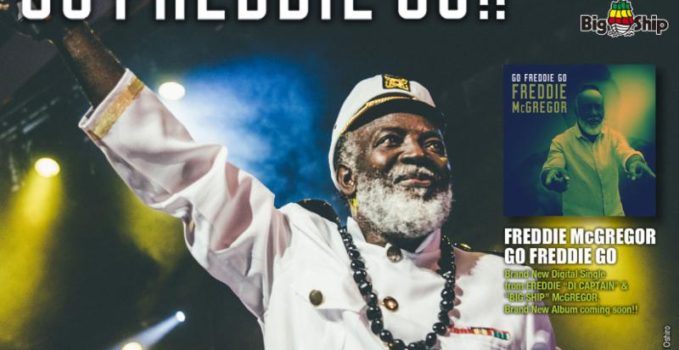 The visual for Freddie McGregor’s “Go Freddie Go’ has premiered today on entertainment site AXS. The video illustrates the legendary reggae icon being the captain of his ship, the same way the lyrics convey how he has navigated the waves of the music industry for many years. A clip of the video was first seen on the most recent episode of “On Stage.”

Filmed at a couple’s resort in Negril Jamaica, the video shows shots of Freddie as the captain of his ship in the bright blue sea’s while various faces are shown singing along to the song. He is also seen performing on stage and engaging with locals as the video flashes to footage of various times in his career.

The song was produced by Lincoln Thomas for Linkgitz Production and written by Freddie McGregor with Lincoln Thomas and Kemar Williams. The lyrics embody self-conviction that whatever is thrown his way, he can handle, as Freddie sings “I’m moving much faster, And I make nothing stop me, because Freddie always ready…”

In addition to releasing his new music, Freddie will be embarking on a tour this summer with stops in the U.S. and Canada. Fans can come witness his vast music catalog live as he hits venues in Boston, Los Angeles, Washington DC, New York and Vancouver with more dates to come.

“Go Freddie Go, is truly a musical chronology of my life and career through my experiences, my journey and my legacy,” said Freddie of his new single. “I thank my fans for making this song #1 in NY and Florida. You have been with me through the ups and downs…this song is for you,” McGregor concluded.