A slice of Jamaica flew into New York City this past Tuesday (April 17), when Red Stripe Presents Reggae Sumfest took over The DL nightclub. The purpose of the private event was to raise awareness and celebrate the island’s leading annual music festival, which will be held in Montego Bay from July 15-22, 2018. Caribbean music, food, speciality cocktails and Red Stripe beer flowed throughout the evening as the room filled with press and industry tastemakers. 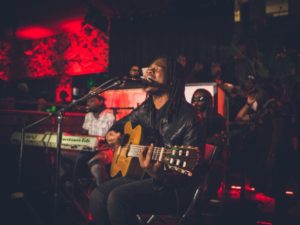 To tip off the performances, an unveiling of the official poster was revealed and remarks were made from Reggae Sumfest (Owner and CEO Josef Bogdanovich and Co-Founder Robert Russell), Jamaica Consulate of New York (Consul General Ms. Trudy Deans), Red Stripe (Jamaica’s Ambassador Reshima Kelly), Jamaica Tourist Board (Christopher Dobson) and more.

DJs Road International, MadOut and Cali B provided sweets reggae sounds until the evening came to a close. A live stream of the event was hosted by Noah Powa and Skatta Burrell and broadcasted from Irie Jam 360, Hype TV and reggaesumfest.com. 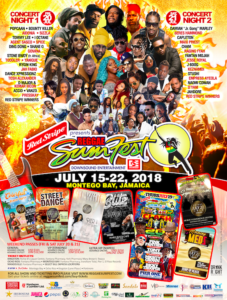 Sumfest has earned a reputation as the Caribbean’s premier music festival showcasing Jamaica’s indigenous music as well as many other popular global genres of music. Now in its 26th year, the world’s greatest reggae music festival continues to pay homage to the musical genre that originated in Jamaica and has become a global phenomenon. Sumfest continues to add unprecedented value to “Brand Jamaica” by promoting two of the country’s most valuable products – the music and the island itself as a tourist destination. Since its inception, Sumfest has made Montego Bay and the surrounding areas a prime summer destination for visitors and locals alike who flock to the city to enjoy some of the best talent in Reggae, Dancehall, Hip Hop and R&B. Over the years, Sumfest has partnered with a number of major local and international brands. Their goal is to continue these long-standing partnerships and develop ways to enhance their relationship with Sumfest to drive incremental value for their brands. Sumfest is owned by Joseph Bogdanovich and produced by his company DownSound Entertainment.