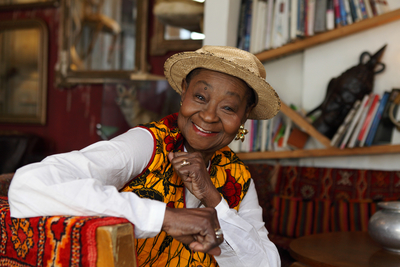 Calypso Rose will headline a concert at Highline Ballroom on Tuesday, April 24. She’ll be performing selections from her recently announced album, So Calypso!, out May 25 via Because Music.

The album features a number of covers of songs that inspired and influenced her alongside six new studio recordings of self-written tracks taken from her extensive, much loved and acclaimed songbook.

The track-listing is as follows:

5. Underneath The Mango Tree

6. I Say A Little Prayer

The legendary ‘Calypso Queen’, born McArtha Linda Sandy-Lewis on the Caribbean island of Tobago in 1940, is without question one of the Caribbean’s musical greats. Ordained ‘Calypso Queen’ in 1972, he still lives-up to her title. To this day, she’s a spokeswoman for this previously exclusively masculine style originated in Trinidad & Tobago and is a powerful figure in today’s fight for women’s rights.

Her last album for Because in 2016, Far From Home, was a massive breakthrough success going Platinum in France and scooping a prestigious Victoires de la Musique (the French Grammys). She continued to tour the globe in support for the album and was also ‘Artist Of The Year ‘ at the WOMEX Awards in 2016.

On her new album, So Calypso! the Tobago diva decided to pay tribute to the artists who influenced her musical career and her life: Nat King Cole, Aretha Franklin, The Melodians and Angelique Kidjo. From America, Jamaica or Benin, they all inspired the most senior female Calypso artist to combine black music and social activism from the start of her career in the 1960’s. The first taste of the album will be her cover of Nat King Cole’s ‘Calypso Blues’, a track on which the famed crooner, pianist, and militant against racism and segregation questioned the ‘American dream’ praising papaya juice and prawn rice over hot dogs, as well as an easy living penniless life and the beauty of Trinidadian women. Calypso Rose reinterprets it with humour, adding a touch of reggae and soul, with a video where she appears dressed as a man, wearing braces and a straw hat. The 78 year-old diva with 22 albums under her belt skilfully plays with the ideas of nostalgia, Caribbean “blues”, easy living and a continuing struggle.

Calypso Rose wrote her first hit song, “Glass Thief’ at the age of 15. Initially singing as the Crusoe Kid, by the time she turned professional in 1964, she had been dubbed Calypso Rose.

Among her early hits were the suggestive “Fire In Me Wire”, which has since been recorded in eight different languages, and 1970’s “No Madame”, which generated political controversy by criticising the treatment of domestic servants in Trinidad and urging them to rebel against bullying employers.  The song caused such a furore that Eric Williams, the Trinidadian prime minister, summoned a cabinet meeting. “From there the law was changed and domestic servants got a fair wage,” she says proudly. She reprises the song with a fresh arrangement on the new album.

A feminist pioneer, Caribbean cultural icon and prolific recording artist who’s written over 800 songs in over half a century, it’s more than 40 years since Calypso Rose was first crowned calypso queen – She first won the annual Trinidad Road March, the top honour awarded to the song played most often at the judging points along the parade route during carnival, with 1975’s “Do Dem Back”; but in the male-dominated world of calypso, the title was stripped from her and given to Kitchener instead. Undeterred she was back in 1977 when she won again with “Give Me More Tempo” – and this time she was allowed to keep the prize.  At the following year’s carnival her song “Come Leh We Jam” won the ‘Calypso King’ competition, forcing the organisers to change the title to ‘Calypso Monarch’ in her honour.

ABOUT THE HIGHLINE BALLROOM
The Highline Ballroom is a 700-capacity standing, 400-capacity fully seated venue located in the heart of Chelsea. Long known as the artistic heart of New York replete with its artist lofts, gallery spaces and charm, the Chelsea neighborhood was the perfect location choice for the space. Nestled beneath the High Line, a 1.45-mile-long elevated public space complete with landscaping and viewing outposts that runs through the West Side neighborhoods, the Ballroom boasts a state-of-the art sound and light system, a balcony, seated wings and a variety of floor setups. The venue’s pristine production quality allows for superstar stadium acts to play a more intimate show for their fans without compromising the level of sound or performance. Marquee artists from Paul McCartney, Stevie Wonder and Carlos Santana to Lady Gaga, Justin Bieber and Amy Winehouse have all been swayed by the unique ambiance of the Highline Ballroom.