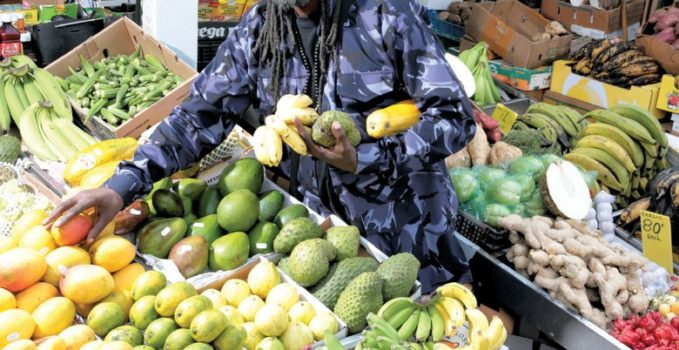 Posted On December 4, 2017 By Ann J In Caribbean Cultural News With 982 Views

While Macka B hasn’t touched meat, fish, or dairy in more than three decades, it was only seven years ago that the acclaimed reggae artist turned his musical attention toward his plant-based lifestyle. “People were thinking there’s nothing else to eat!” he says, letting out a deep chuckle. “But I’m a big man. I’m 6-foot-3 and a double XL. I must be eating something!” And so, the England-born Rastafarian set out to demystify with “Wha Me Eat,” a catchy tune that calls out dozens of foods that herbivores can enjoy. “It became a vegan anthem.”

Today, those healthy-eating anthems can be found on his Instagram, where he posts “Medical Monday” and “Wha Me Eat Wednesday” videos every week in an attempt to highlight the benefits of different fruits, vegetables, and herbs. “I’m just trying to encourage people to eat healthily—in my style: with rhyme and a bit of rhythm,” he says. It’s an approach that’s proved successful: Macka was shot to social media stardom after his song about cucumbers (pronounced coo-coombah) and their varied vitamins and minerals and hair- and nail-strengthening perks was reposted by the likes of Naomi Campbell and Tracee Ellis Ross. “Instead of concentrating on the negative and saying, ‘Stop eating this!’ we are saying, ‘Do you know how good these foods are for you? Do you know how much your body is yearning for one of these?’ ”

For all the facts he spews in his songs, including his earlier work that dealt heavily in politics, black pride, and gender equality, to his recently released album, Health Is Wealth, Macka’s conscious approach is above all spiritual. He rises between four and five in the morning when his mind is at his most fruitful—“it’s just you and the birds and nature and the universe, you know?” he says—and claims to see the lyric-writing process as mystical. “People can feel the sincerity of [my songs],” says Macka, who’s had a lifetime of experience with his current subjects. Take, for instance, buchu—a South African “miracle” leaf that once cured his son’s cold-like symptoms—or guinep, a vitamin-rich fruit common in the Caribbean but rare elsewhere. “Prevention is better than cure,” he says as he takes a sip from an energy-boosting spirulina concoction. “You gotta look after yourself. You’re number one and you’re really worth it. And if you love yourself, you’ll give yourself only the good things in life.”