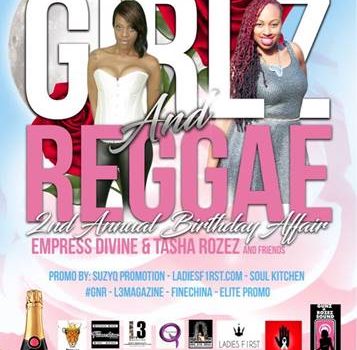 Sound Fraternity veteran Tasha Rozez, founder of the landmark event Girls and Reggae, alongside performing artist Empress Divine, invite fans and members of the Sound Fraternity to their Saturday December 2nd event at the iconic Harlem Underground (745 Queen St. W) in Toronto which celebrates both ladies birthdays.  Part of the nights proceeds goes to an organization that assists to eliminate violence against women.

Attracting the who’s who in entertainment, the second annual event honors the birthdays of Tasha Rozez and Empress Divine and boasts of an all star musical line up which includes appearances and performances by Canadian Reggae King Exco Levi, Tasha T, Mel Dube, Tonya P as well as selections on the wheels of steel by Noble Works, Lindo P, Rebel Tone and VIBE 105.5 FM’s Mel Boogie and more!  Knowing the event will lock the City of Toronto, Tasha Rozez said “even though the event is called Girls and Reggae, this is a co-ed event and the men are just as excited about performing and playing as the girls are.  The brand Girls and Reggae started as a way to acknowledge the accomplishments of Girls who work in the Reggae genre.  Now, it has grown to not only acknowledge them, but to host events throughout the year to support what they are doing too!  This upcoming event is to celebrate mine and Empress Divine’s Birthday’s, and it also is a coming together of the best in the industry which doesn’t happen often.  We’re thankful for the support!”  Empress Divine added “what brings all of us together is our respect for each other and our love of music.  It’s not every day you have so many heavy hitters in one place, so December 2nd will be special.  We invite everyone to come out!”

Tasha Rozez has traveled the world selecting for fans with her sound, Gunz and Rozez.  Playing for sold out audiences as far as Germany and as close as New York, patrons agree that she is one of the best selectors to represent Reggae worldwide.  She has graced the cover of NOW Magazine as well as L3 Magazine and has appeared on national television as a guest on talk shows as well as lifestyle shows.  Her development of the brand Girls and Reggae has been inspired in part because of the feedback she receives on a daily basis.  “There are so many women doing great things for our industry, so it is right to promote Girls and Reggae so these notable women can be acknowledged!”

Empress Divine, who began her career as a performing artist, has recently added selector to her entertainment packaging.  Well known and well respected across Canada and in the Caribbean, Empress Divine’s musical mandate is to bring positive vibes wherever she plays.