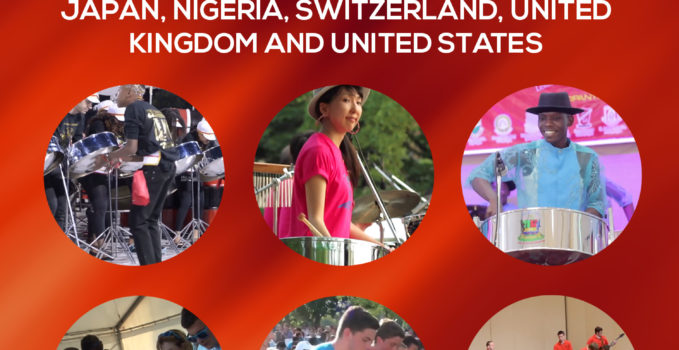 Panomundo is a feature-length documentary, told in two sections, about the history of the steelpan its global influence. Part 1: The Evolution of the Steelpan was released in London in 2015. It focuses on the inception of the steelpan in Trinidad & Tobago until its international recognition in 1951 at the Festival of Britain.  It has been an official selection in seven film festivals, including the Trinidad & Tobago Film Festival in 2016.  Part 2: Pan Worldwide looks at the instrument’s impact in six countries: Canada, Japan, Nigeria, Switzerland, United Kingdom and the United States.

“This is a very exciting time for us,” says Harper, the Trinidadian-American producer of the documentary, who is in New York following a Part 1 screening. “We have been working on this film for over five years and it has been our dream to have the world premiere of Part 2 where the instrument was born.”

In January 2012, Morton and Harper traveled to Trinidad to begin production of the documentary. What was expected to be an hour-long film turned into a larger story encompassing an array of people on various continents. By 2015, the duo amassed over 60 hours of footage where a decision was made to split the film in two sections. Because Part 1 closes with the international performance of the Trinidad All-Star Percussion Orchestra (TASPO) at the South Bank in London, Morton and Harper decided to host the World Premiere in the same location in August 2015.

“The Part 1 premiere was very humbling for us,” explained British director Morton. “It was a real challenge to condense the material into a coherent story and we hope that it will be accepted by the tough Trinidad audience.”

The World Premiere of Panomundo Part 2: Pan Worldwide will take place at the Audio Visual Room (basement level) in NALIS (Hart and Abercromby Streets, Port-of-Spain) from 6:00PM to 9:00PM. It will open with a screening of Part 1, followed by an intermission. Part 2 will begin promptly at 7:30PM with a Q&A, pan legend recognition and steel band performance. As seating is limited, RSVP is mandatory. For those interested in attending, please visit http://tinyurl.com/Part2premiere .