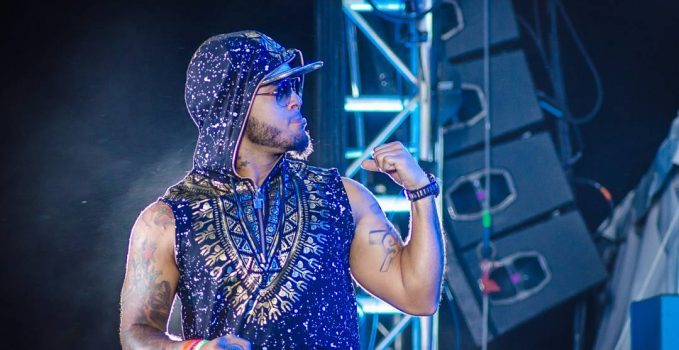 Port-of-Spain, Trinidad & Tobago. May 24th, 2017———— A weekend reminder that rest and relaxation does exist. Soca heartthrob, Ricardo Drue spent last weekend on the beautiful island of St. Lucia where he bore witness to the marriage of two of his very close friends. It was a good reality check for the ‘Stamp Yuh Name’ singer whose been jetting across the region and internationally for months. With several projects high on his priority list, Ricardo shows no sign of slowing down and he admits, quality time with family is most missed. The artiste, whose front line status with the Roy Cape band is only the beginning of his professional pursuits, has major feats to conquer this year and he’ll stop at nothing.

In the st few months, following Trinidad and Tobago’s Carnival 2017 festival, Drue has travelled to Toronto, Antigua, Jamaica- two weeks prior to Jamaica’s carnival, St. Martin, St. Thomas, Bahamas, and after that he jetted over to Los Angeles where he met up with production team, Mad Decent. He recently signed a deal with the group for the re-release of his hit single ‘Vagabond’ and with a thrust being made to take the single to the mainstream global music market, Ricardo’s definitely in for the ride of his life in the next few weeks and months. He said a new video is being done for the single- something fans will be blown away by.

A few weeks ago, he was pulled in by Mad Decent to represent for them as they launched a speaker. A couple international interviews presented even more opportunities for the young, Caribbean entertainer to shine internationally. “It’s been quite a ride so far and things have only just begun. I’m enjoying every moment of it though. There’s nothing for me to complain about. I truly believe victory comes to those who put in the work so my team and I are pushing hard,” he said. Ricardo’s been making a lot of strides, this despite the fact that he’s yet to taste the success of capturing a major crown in Trinidad and Tobago. He has however been a king in his birthplace of Antigua and continues to thank his supporters there, for the love they constantly show him. On August 1st, Drue will present his first concert showcase in Antigua. Dubbed ‘Druesday’ the concert will see the merging of several Caribbean music genres and the collaborative energy of a number of local and international performers, who’ll share the stage with him on what he promises will be a very special night.

There’s no slowing down, no stopping. “Between December 26th, 2016 and May this year, I’ve only seen my family for two weeks,” he admitted with a hint of sadness, but he says he knows it will pay off. “There really is nothing for me to complain about. Soca has brought me a lot of joy and a lot of success. I am eternally grateful to the art form,” he said.

In recent days, the young heartthrob released new music- a song he called, “The Break Up Song”. He teamed up with Bass Ink Productions and jumped on the Jack Frost riddim with other soca stars like, King Bubba, Skinny Fabulous and Lil Rick among others. It was a release filled with strong emotion but enjoyable from the beginning to the very end. “It’s important to create music that’s relatable to everyone. Outside of carnival where the aim is to deliver songs to make the people jump and really sweat, we as artistes have to present music that can play on radio throughout the year. I get that, and I’ve been working my butt off with a lot of producers to deliver more, year round,” he said.

From an endorsee of brands like Digicel, JP Chenet and the Jamieson line of Vitamins to an all out soca brand, delivering amazingly well year-round, Ricardo Drue is doing all that he has to, to remain a positive force in the soca arena. ———| END.