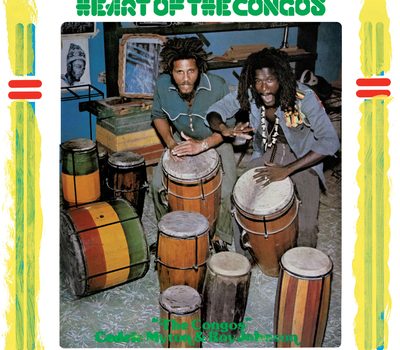 A 40th anniversary edition of the iconic reggae album “Heart of the Congos” will be released by VP Records on June 9th. The album will be its most complete version for this edition.

Produced by Lee “Scratch” Perry in 1977, the release was re-mastered by Kevin Metcalfe at the Soundmasters, UK and features the original mix with dubs, disco mixes and ‘Don’t Blame It On I’- a “missing track” discovered by Steve Barrow and David Katz in 1997. Christopher Chin of VP Music Group Inc. served as the Executive Producer of the project.

First released in Jamaica in late 1977, The Congos soon after issued the album in Jamaica on their Congo Ashanty label and soon saw its first international release in 1980 on Jah Live in France. Subsequently, “Heart of the Congos” gained its first UK release on the Go Feet label operated by The Beat (aka The English Beat).

In 1996, the Blood & Fire Record Label released Heart of The Congos in double CD and LP formats. It became a best seller for the label and years after its inception, it finally earned the mainstream acknowledgement that had previously proved so elusive. In 2007, Blood and Fire stopped releasing records and “Heart of The Congos” was no longer available in this extended form. Now in 2017, VP Records will deliver the project in the form of a three disc album, complete with liner notes by Harry Wise, keeping the “Heart of Congos” legacy alive.

“The reissue of ‘Heart of the Congos,’ is a key release for us this year,” said Christopher Chin, CEO of VP Records. “We thought the 40th anniversary would be a great opportunity to highlight the monumental influence that this album has had on reggae music.”

The Congos group consisted of the duo “Ashanti” Roy Johnson and Cedric Myton, later becoming a trio with the addition of Watty Burnett.