After an absence of many years Rapso-Fusion band Chantwell returns in concert with Ragga ‘bad boys’ 3Suns this Friday 9th December 2016 at the Big Black Box theatre on Murray St. Woodbrook from 8pm– 2am. Titled ‘Rebel Music’ the concert is twinned with the launch of Generation LION Jouvay’s 2017 band called ‘Root and Branch Jouvay featuring Rebel Soldiers.’ Accompanied by multi-media projections the party begins with DJ Shawn spinning vinyl ‘Old-School’ music from 8pm. The live bands play between 10pm- 12am, and then DJs Shane & Mika take the party to the next level with digital ‘New School’ remixes of Soca, Hip-Hop, Dancehall, EDM, and Afro-Beat.

Chantwell is Rubadiri Victor and the musicians he collaborates with on each project. The band was well known in the 90s during the ‘Rapso explosion’ years for the anthemic radio and video hit ‘Clear de Way’. Chantwell was signed to the Rituals Music label in the 90s and an EP ‘Come Out in de Road, Warrior!’ was produced with songs like the title track and the groovy World Beat Rapso of ‘Morning Ground’. Singles from the album appear on more than 30 compilations internationally. Chantwell has had songs nominated for Sunshine Music Awards.

Generation Lion’s 2017 Jouvay presentation has 2 sides. The ‘Root and Branch Jouvay’ is taken from the old Jouvay tradition of men coming into town with broken-off branches, flowers, or all manner of vegetation on their bodies. The ‘Rebel Soldiers’ part of the band invokes a series of iconic Caribbean resistance heroes. The band says, “From (Carib war-chief) Hatuey and (Jamaican Maroon leader) Nanny Buku to (Hatian liberator) Toussaint and (Cuban revolutionary leader) Fidel Castro- the Caribbean has produced a long line of Rebel Soldiers & Maroons! Generation Lion believes we in the world are at a Maroon Moment- where the People have been abandoned by Governments who have refused to build the Dream Societies the People have fought for. Now the People must build the Golden Societies themselves led by the Heroic Ideas of our past. The Caribbean Jouvay Army is on the March!…” Revellers can jump up as one of the Caribbean Icons as they take the road for Jouvay 2017. 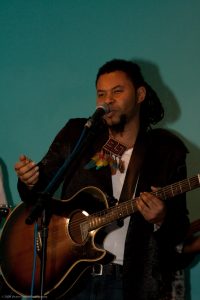 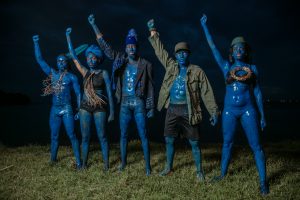