Music fans worldwide were recently delighted when critically acclaimed reggae band Morgan Heritage announced the upcoming release of “Strictly Roots, the Deluxe Edition” just in time for the holiday season. The hit filled 2016 Grammy winner for Best Reggae Album now available for pre-order, will be released December 9th featuring 4 bonus songs and 3 remixes. As Mojo Morgan previously stated, “We’d like this Deluxe Edition of Strictly Roots to light up everyone’s holiday season with love from our family to yours.”

Although the past year has seen Morgan Heritage performing worldwide from intimate settings to sold out arenas, The Royal Family of Reggae who is known worldwide for their riveting live performances, are pairing up the upcoming release with an anticipated “Back To Basics Promo Tour“.

“Every so often an artist has to recreate themselves after being in the game for a while. After realizing the highest honor in music, it’s time for us to take the next step by thanking the community that made us relevant to begin with. When we say community, we speak of our Caribbean Communities around the world“. – Morgan Heritage

Internationally praised and renowned, the band has always remained humble and fans made a priority, after receiving the highest musical honor, it was important for the Royal Family of Reggae, to intimately thank their fans, and take it back to how it all started. “As a band that started in the Dancehall (the place people go to hear Jamaican music), the phrase Back To Basics means we get to perform and hangout with the original and new fans of our music in the Caribbean Community. So no band will be on stage for any of these performances. Just a mic, the music and good vibes rocking with the people throughout the night”.

“We’ve spent so many years expanding our audience and we felt as we prepare to release our 11th studio album in the Spring of 2017, that we should let the people that first fell in love with our brand of Reggae music know that we love and appreciate their continued love and support“. – Morgan Heritage 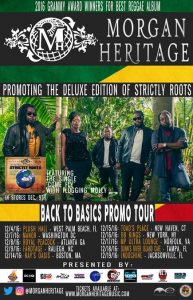