She touches on key social issues throughout the album. The soul-tinged reggae track  “I Can’t Breathe” rails against ongoing police brutality in America; the ska flavored “Rebellion” name checks uprisings across several continents that have secured rights and improved the lives of many marginalized individuals. This sentiment is reinforced on “Battlefield”, which warns “we never yield, its war on the battlefield, if you nah hear you ah go feel.”

She also continues to uplift the younger generation. Queen’s beautifully sung lyrics encourage perseverance during hard times on the title track and she reveals two of her greatest motivational sources, her mother and grandmother on “Ask Me Granny.”  On “Black Woman” she implores young ladies to know their worth and not be swayed by objectifying trends in popular culture.

“These songs come to me as I am watching the world; I see myself as a social worker that uses music as my tool because music is the greatest weapon to impact societal change, to help young people to understand themselves more,” Ifrica says.

On November 16, 2016 in NYC, Queen Ifrica will be performing select tracks from the album to give fans a taste of what is to come. The intimate live show will be held directly after the launch party for Jamaica’s renowned Rebel Salute music festival at Milk River in Brooklyn, NY. 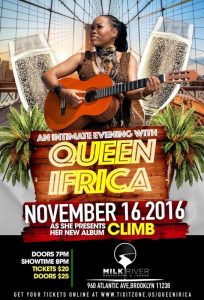