PRESS RELEASE || Nesbeth Wins 'Song Of The Year' at IRAWMA Awards and Shoots Video for 'D.I.A.L'

Despite the torrential rains of Hurricane Matthew lashing segments of the Caribbean and threatening the United States that still was not enough to stop the 2016 installment of the International Reggae and World Music Awards (IRAWMA) which unraveled on Sunday, October 2, 2016 in Fort Lauderdale, Florida. Established in 1982 and now in its 35th staging the award show is geared towards acknowledging and honouring the accomplishments of stalwarts in the Dancehall, Reggae and World music genres across the globe.

Staged at the Coral Spring Centre for the Arts the night’s festivities saw a number of the region’s stars coming out as big winners among them Reggae firebrand Nesbeth who won “Best Song of The Year” for his monster hit ‘My Dream’ he was also nominated in the category of “Best Male Vocalist” vying for top honours against Tarrus Riley, Romain Virgo, Christopher Martin and Grammy nominee Jah Cure.  In accepting the award the Trench Town native said, “Winning the IRAWMA for ‘Best Song of the Year’ on my birthday was more than a present… tears of joy. I would like to dedicate this to my wife, my children, my team and my loyal fans thanks be to Jah.”

Earlier, delivering one the best performances of the night Nesbeth was thoroughly surprised by a member of the organizing committee who presented him with a cake amidst his set, the cheering audience quickly joined in to sing him happy birthday much to the delight of the packed house.

An obviously shocked Nesbeth said, “You’ll stop before you’ll make me start crying in here___ you see I am all about my kids so as long as they are happy I am happy… sometimes these things (referring to his birthday – October 2nd) pass and I don’t even realise. Right now I can’t even find words to say but I want to thank you all very much and I will never forget this moment.”

This award marks Nesbeth’ third for the year, he previously won ‘Song of the Year’ at the 2016 JARIA Awards and the Marcus Garvey Award for Music in August.

Back on local soil, the singer has completed the video shoot for ‘D.I.A.L (Devil Is A Liar) with international British based director Jay Parpworth and is also expected to officially release his new single ‘Live Every Minute’ this Friday. The Entertainment Soul produced project is distributed by Zojak Worldwide and will be available on iTunes and all major digital platforms.

Meanwhile, Nesbeth is scheduled to depart the island for a pair of concerts in Nassau and Bimini next week. 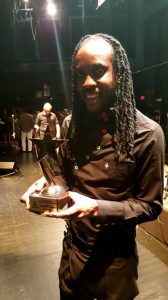