Today on the road, Jah9 drops 9mm Vol. 2: Pre-Album Groundings, a thought-provoking and intentional mix of originality and inspiration to gear up for her highly-anticipated sophomore album 9,  out 9/9 on VP Records/Steam Chalice Records and available for pre-order now.

With Jah9’s lioness lyrical dexterity and soulful rich production, her authentic spirit shines on Vol. 2. Her latest offering features original, never-before-heard music including “Unafraid” (a standout track from her upcoming album addressing child molestation) and pays homage to some of Jah9’s greatest influences, both spiritually and musically.

She incorporates empowering speeches from Haile Selassie I, Ra Un Nefer Amen & Drunvalo Melcheziek, encouraging her listeners not only to journey into higher levels of consciousness, but seek out information and knowledge. She also celebrates some of her most beloved musical inspirations with one-of-a-kind covers of Nina Simone’s “Misunderstood” Tracy Chapman’s “She’s Got A Ticket,” Ras Micheal’s “New Name,” Dennis Brown’s “Blood City” and an invigorating medley of Sizzla Kalonji.

9mm Vol. 2: Pre-Album Groundings is an introduction of what’s to come on 9 | 9 | 2 + 0 + 1 + 6 = 9. Her entirely self-produced sophomore album 9 is a combination of intellectual rigor, real world activism and lyrical musicality.  The album’s first single “Humble Mi,” also featured on 9mm Vol 2., is available now on iTunes.

For those who’ve been waiting for Rasta consciousness to mount a resurgence in contemporary reggae, Jah9 is a figure of revelation. She first caught the attention of many with a string of singles including “Avocado,” “Steamers A Bubble,” “Jungle” and “Gratitude,” The singer-songwriter and producer boasts a soul and jazz inflected melodicism and possesses a fiery vigor in her dynamic live shows. Jah9 is also university graduate, a multidisciplinary yoga instructor, a youth at risk counselor and a celebrated poet.
www.Jah9.com 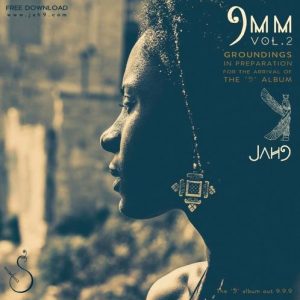