CEO Mr. Biggs of Platinum Camp Records in association with Reggae Sumfest presented for the first time in history, Barrington Levy and Beenie Man on stage in Montego Bay, Jamaica. Together they performed their mega hit single “Murderer” which sent the crowd in a mass frenzy after witnessing this historic performance.

It became a diplomatic affair as CEO Daddy Biggs arranged for music ambassador Shyne to fly to Jamaica from Belize to join Barrington Levy aka mellow canary for a surprise collaboration of their number one hit records “Bad Boys” and Bonnie and Shyne. The crowd erupted as the hip hop/reggae duo performed. It was a night of sheer pandemonium to see the two bad boys walk on stage for a final showdown.

Yet in another interesting move, Daddy Biggs of Platinum Camp Records has arranged a Latin American and a European tour for Levy in the final quarter of the year which commences in Chile in October 2016.

Barrington Levy is also promoting his latest single G.S.O.A.T, which means “Greatest Survivor of All Time”. The song is an excellently crafted masterpiece that is set to be released on August 6th to commemorate the great survivors of Jamaica and its independence. 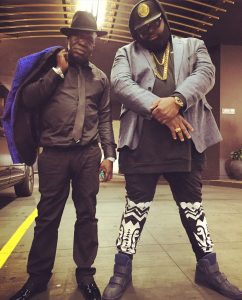