PRISM MARKETING CONSULTANTS || JULY 18, 2016 || Fresh from a myriad of appearances in Toronto, New York , Tampa and Orlando, Reggae firebrand Nesbeth is back on local soil and fully focused on conquering the stage at this year’s Reggae Sumfest. 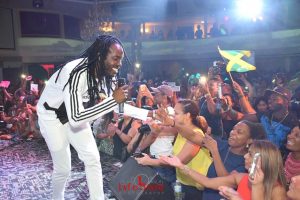 Despite an exhausting schedule the Rastafarian crooner who will be making his third appearance on the festival is very upbeat about his upcoming performance and promises fans something spectacular on Friday night (Dancehall Night – July 22nd).

“Reggae Sumfest is one of those world renowned festivals where music lovers across the globe descend on Jamaica to see their favourite acts live in concert and so we can’t give the same performance that they’ve grown accustomed to, therefore on a platform such as this we have to showcase our best and even give a little more and that’s exactly what I intent to do this weekend in Montego Bay.” – says Nesbeth.

Under the helm of new franchise owner Joe Bogdanovich, the festival now in its 24th year will see the introduction of a live 360-degree virtual reality streaming for the public to experience the festival on any device over high speed internet. Sumfest will commence with a beach party followed by a performance line up of local and internationally acclaimed Reggae and Dancehall acts. This year’s staging will also have two concert nights and see the introduction of ‘Sound Explosion’ on Thursday, July 21 at Pier 1. Sound Explosion will feature top tier sound systems  and selectors spinning the biggest hits of yester-year.

Dancehall night will unfold on Friday, July 22, 2016 at Catherine Hall, Montego Bay with headliners Nesbeth, Beenie Man, Assassin, Spice, Popcaan among others. The festival will conclude on Saturday, July 23 with Reggae Night featuring stalwarts such as Barrington Levy, Sanchez, Tarrus Riley, and others.

Following his Sumfest performance, Nesbeth amidst promoting his latest single ‘D.I.A.L’ (Devil Is A Liar) is scheduled to depart the island for a series of assignments in Bimini, Nassau, Freeport and Grand Cayman later this month before turning his attention to the U.K. in August.