Raging Fyah, one of the fastest rising roots reggae artists from Jamaica, just released their third studio album entitled Everlasting on the Dub Rockers imprint. The five-piece Kingston collective recently toured the U.S. with Stick Figure winning over new fans with AXS stating, “Raging Fyah is now poised for a significant impact upon America’s vast reggae landscape” and commenting about their live show “…the band never lost touch with the audience throughout the entire performance.”

Listen to select music from the album, including title track “Everlasting,” “Ready For Love,” and “Live Your Life” feat. J Boog & Busy Signal.

The band is performing at the 7th annual California Roots Music & Arts Festival on Sunday, May 29 before heading out for their European tour.  Then Raging Fyah will return to the U.S. in July with twenty dates throughout the east coast, midwest, and west coast with key headlining shows and a supporting slot with Jamaican roots revivalist Protoje on select dates.

The band’s live show captures their recordings, but also brings a new energy to each performance.  Kumar states, “Our sets on this tour will feature songs from Everlasting mixed with some of our classics.  Every night feels special because we feed off the energy from the crowd to create unique elements for each show.” 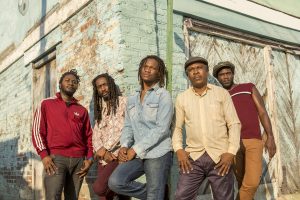 “whole crowd was drawn to its feet in a visible wave, like fallen dominoes getting up again.” (in regards to their 2015 Rebel Salute performance)  -VOGUE