Federation Family Steps Up with the Step Dance Riddim

Antiguan imprint Federation Family delivers another crowd-pleaser with its new Step Dance Riddim, now available worldwide from all major retailers (released on May 27, 2016),  from FOX FUSE.

The Step Dance Riddim boasts 12 melodic dancehall jams that are sweeping partygoers off their feet. These include “Step Dance” by Pipa, “Dancehall Nice Again” by Fucha Kid, “Peppa Steppinz” by Mac Truc,“Step Step” by Federation Diva and “She Lub Um (She Loves It)” by Kiyode Erasto, to name a few. “We wanted to make a riddim that would have everyone around the world dancing,” discloses Karl “Fucha Kid” Edwards, who heads up Federation Family. “It’s been a while since we heard ariddim that when you listen to every track, you just feel like getting up and dancing.”
Composed by Federation Family producer Karim Henry, Step Dance Riddim was officially created for the summer and it has already garnered great reviews, evenbefore its official release. “We at Federation Family Studio are happy to see our hard work pay off,” Edwards adds. “Thanks to FOX FUSE and all of our supporters for making our dreams a reality.” 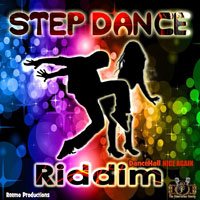