Kicking off the new year and in time for lover’s week, soulful reggae recording artist Omari Banks is delivering “Me & You” produced by multi- platinum, multi-Grammy nominee, Jason “J-Vibe” Farmer.

Music and love transcend all, they are felt with the heart and soul, a universal language that we can all relate, and incorporating the two, Omari tells a stirring story of lost, love and perseverance.

Speaking of the moving song, Omari explains “My inspiration was actually observing relationships and how they can get complicated when outside influences come into the equation. Sometimes all that is needed to bring things back a healthy and good position is the two parties working things out themselves. The song is about a couple who’ve been together for a while that are still in love but get caught up with the day to day proceedings They aren’t spending the valuable time with each other but they realize this and work toward getting things how it’s supposed to be “Me & U”. If you’ve been in a relationship then you will relate.”

Hitting the airwaves, the single has already gathered support and positive feedback from both listeners and broadcasters.

“This is the next Maxi Priest his blend is full of rhythm and his vocals brings a new life to reggae.” – The Gadiethz from The International Morning Ride Show, ZROD 103.7FM Tortola BVI

“Omari’s music continues to grow and evolve. Me and U is the perfect blend of soul and reggae music.” – DJ Stormin Norman, Tropixx 105.5FM in St Maarten

“He has a melodious voice, something that is really special. The message within his song is certainly going to be captivating the heart of many and the minds of those who haven’t heard real vocals in a long time delivered the way he did. As a connoisseur of music, i honestly support this project, and i think that every media house and broadcaster should support and give it the full weight of supporting good music and bring it to the forefront, definitely a thumbs up from me!” – The Connoisseur, RTC 107FM Turks & Caicos

2015 has been a whirlwind year of touring, honor and recognition for Omari, taking it all in stride the humbled artist is looking forward to a new year with new music, video, performances and spreading musical vibes. 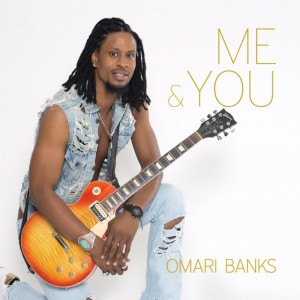 Born and raised on the beautiful island of Anguilla, Omari Banks found his musical calling at a young age when he first took the stage in Milan, Italy to sing alongside his father Bankie Banx . The emotions conveyed through music touched his heart and a star was born.

Founding his inspiration through an eclectic genre of music, Omari went on to perfect his craft by writing and becoming a proficient guitar player. The budding star went on to win multiple talent shows but as a teenager turned his attention to the sport of Cricket, where he excelled first locally, then regionally and ultimately on the world stage.

In 2003, Omari Banks became the first Anguillan to play test cricket for the West Indies. He went to travel the world for twelve years as a professional athlete, but despite his success in sports, Omari never lost his passion for music. He became renowned for traveling with his guitar and giving impromptu performances; even as he focused on cricket. In 2010, Omari made the decision to move on and pursue his passion for music.

With a lifetime of experiences and life lessons, he immersed himself in songwriting and perfecting his musicianship. He dedicated himself to his music and created his debut album, “Move On” recorded in Kingston, Jamaica and Houston, Texas. The album was very well received as a mélange of his musical influences, and can be effectively described as a“contribution to a legacy his dad, Bankie Banks started in the early 70’s.”

Armed with his guitar, Omari aims and strives to bring his words to life.