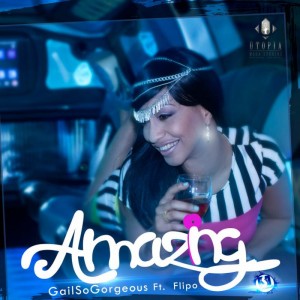 Gailann whose Sobriquet is now (GailSoGorgeous)  gave the Industry a new Sound with her Unique  Voice  in the Early 2000 with her Mega Hits “Watchin Me ft Benjai, Look meh in meh Eye ft Rocky also a Solo Project  Brain Therapy ,Produced by the Late Sheldon ShellShok Benjamin . For 2015 SoGorgeous  teamed up with  Utopia Mega Studios where she is making a different type of statement. The fresh new label has taken up the mantle to work together with GailSoGorgeous taking her to the next level and this can be heard with her first Dancehall/Soca Single with the Team. ‘Amazing’ featuring popular fresh Soca Artiste Flipo who made his burst onto the soca scene in 2013 with his hit song ‘Doh tell meh dat.

You can also listen here.