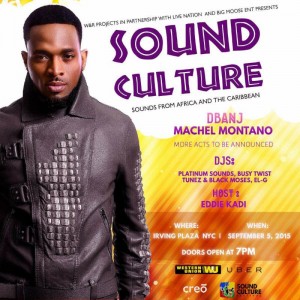 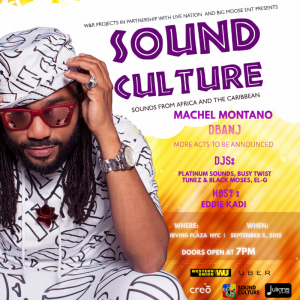 NEW YORK, 29 July 2015: Carnival season is almost here! Following the overwhelming success of the Sounds from Africa and the Caribbean s at Showcases at SXSW earlier this year, W&R Projects have partnered with Live Nation and Big Moose Ent to announce the line-up for the highly anticipated Sound Culture Fest, set to take place at the Irving Plaza during Labor Day weekend on Saturday, September 5, 2015.

Sound Culture is an annual music festival featuring the very best in African and Caribbean music.

Headlining the first ever Sound Culture event is Africa’s biggest entertainer Dbanj and Soca King – Machel Montano who have both had several sold out shows in New York already. For the first time, both the African and Caribbean communities in New York will be united at the city’s famed concert hall to celebrate both cultures and also two musical giants’ best back catalogues.

As part of the celebration to unify both cultures, more epic performers will be added to the lineup in the next coming weeks.

The event which is sponsored by Western Union will be hosted by UK Based African Comedian and Presenter Eddie Kadi.