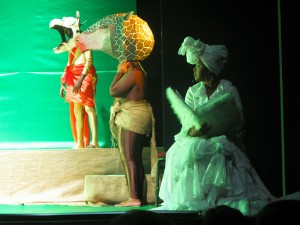 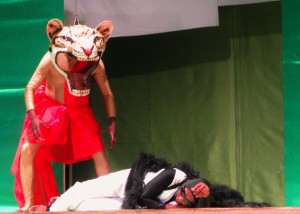 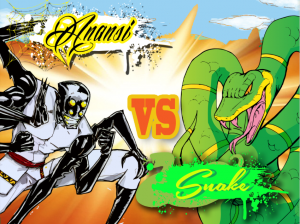 ‘Wire Bend’- the show that has been pushing the boundaries of local theatre moves east. The run at the Little Carib is over. The run at South NAPA is over. Now ‘Wire Bend’ is heading to the La Joya Auditorium from Tuesday 18th – Thursday 20th. There will be 2 shows daily- at 2pm and 6pm. The show has been performing to enthusiastic audiences and even more thrilled children for 2 weeks. WIRE BEND has delivered on its promise to combine top local animators with top Carnival, Hosay, and Ramleela costume artisans to take the telling of local folklore to another level.

Everyone is talking about the spectacular costuming and design of ‘Wire Bend’. The production features costumes by some of Trinidad’s greatest Master artisans- like Carnival and Hosay Master Reish Baboolal, his wife Kavita, and their apprentices. The audience favourite ‘Anansi and the 10 Dragons’ features costumes by Paramin blue devil genius Mark Felician, dragon-costume champion Jason Meighoo; and young dragon Master Vernan Mohammed. The history making piece ‘The Cricket War’ features alien costumes by gorilla mas genius Curtis Jardine. The entertaining ‘Anansi tricks Bees, Snake, and Tiger was overseen by young Master designer Michael Guy James, ably augmented by contributions by young talents like Basil Dickson… One of the aims of the production was to assemble the best of the best of T&T’s artisans outside of their Festivals and give them and their costumes another platform of relevance.

‘Wire Bend’ is also pioneering in its integration of animation with live action theatre- building on experiments first conducted in 2009. The animation was led by Anderson Mitchell and Nu Artillery, with illustration and animation inputs from young local talents like Victor Dolabaille, Jason Alfred, and Roger Pierre. Young people are asked to come see the results! Tech support is provided by North Eleven.

All of this talent was brought together in service to local folklore. “Storytelling remains fundamental to creating a Society. 52 years after Independence our children are still being brought up on alien stories and heroes. Foreign TV, books, and games. This is a relaunch of the movement to end that,” said writer/director Rubadiri Victor. “This is about honouring our Imagination and the Indigenous.” WIRE BEND has a remarkable cast. It stars popular veteran actors: Kurtis Gross and Kenwyn Felix; ‘young veterans’ Arnold ‘Pinny’ Goindhan and Mark Nottingham; and a beautiful younger cast featuring Nicole Wong Chong, Renee King, Sasha Clarke, Shelly Narine, Aaliyah Sargeant, and Dalton Joseph from Tobago.