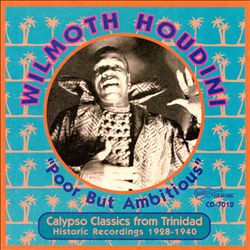 With his 1929 recording of “Executor Doomed to Die” New York City based calypsonian Wilmoth Houdini challenged a Trinidad based rival, Lord Executor, and made history, delivering the very first dis or clash record, decades before the legendary verbal spars between The Mighty Sparrow and Lord Melody in the 1950s or the traded insults between Jamaica’s ska pioneers Derrick Morgan and Prince Buster on a series of hit singles in the 1960s.
Born Frederick Wilmoth Hendricks in Port of Spain in 1881 (some accounts list his birth year as 1885) Houdini’s career began in 1916 in Trinidad’s capital where he sang as a chantuelle with the African Millionaires masquerade band and also performed in calypso tents.
Houdini had worked on various cargo ships, traveling throughout the Caribbean, Europe and South America prior to his arrival in New York in 1927. His initial recordings were done in August that same year for the Victor Company, a session that yielded three 78 RPM singles: “Caroline”, “Goodnight Ladies and Gents” and “Run You Run”, featuring Lionel Belasco on piano, Gerald Clark on guitar and a non-credited cuatro player.
Houdini’s 78s ushered in a significant shift away from vaudevillians recording calypso, as several Port of Spain tent calypsonians followed Houdini to New York and went on to establish recording careers. By 1929 Houdini would record about 30 calypso sides for the Victor Recording Company. He also cut several singles for Decca Records, often backed by the jazz group Gerald Clarke’s Night Owls and for the Okeh Record Company and Brunswick Records. By 1940 Houdini would have released more than a hundred 78s, alternately credited to Fredrick Wilmoth Hendricks, Edgar Leon Sinclair (said to be the name on his US passport) and his calypso moniker, King Houdini.
His 1939 single “He Had It Coming” became a major hit for Louis Jordan and Ella Fitzgerald in 1946, retitled as “Stone Cold Dead In The Market”. The song topped the R&B Juke Box chart for five consecutive weeks and even reached no. 7 on the U.S. pop chart, an unprecedented success for calypso that solidified Houdini’s status as the genre’s first superstar, confirming the Big Apple’s importance to calypso’s development. Houdini used his newfound celebrity to promote calypso shows and festivals in the city, especially in Harlem, which was then home to many West Indian immigrants.
Houdini incurred the wrath of many Port of Spain calypsonians who weren’t merely jealous of his success or testing his abilities (prerequisites in all musical wars, including contemporary hip hop battles or dancehall deejay clashes); Roaring Lion and Atilla The Hun, were among the prominent Trinidad based artists that claimed Houdini had stolen their songs and copyrighted them in the USA (Houdini’s close associate, bandleader/pianist Lionel Belasco, was similarly accused). Roaring Lion expressed the begrudging sentiments best in his single “War” which Houdini counteracted with the (somewhat weaker) “Declaration of War”, both songs released in 1934
Houdini would continue to record and perform for years to come; his success was a major catalyst for the initial calypso craze in the US in the 1930s and 40s and he also benefitted from the second wave of mainstream mania for the music in the 1950s with a regular gig at the Caribbean Club on 7th Avenue in midtown Manhattan.
Although he visited Trinidad occasionally, Houdini spent most of his life in New York City. He passed away on August 6, 1973 and is buried in Woodlawn cemetery in the Bronx.