The years 2012 and 2014 marked the 100th anniversaries of two important developments in the trajectory of Caribbean music: in 1912 Lovey’s String Band traveled to New York City from Port of Spain, Trinidad and made the first instrumental recording designated as calypso; two years later, the first calypso record with vocals was recorded in Port of Spain by Julian Whiterose, for New York City based label Victor Records. So began the close, collaborative, musical relationship between Port of Spain and New York City. 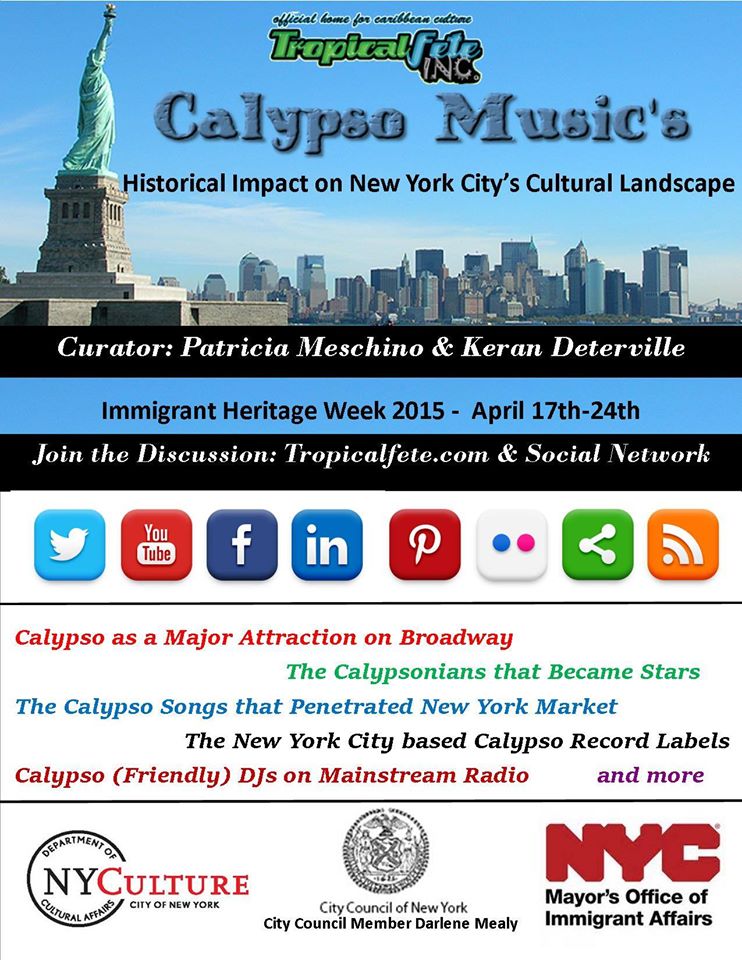 In observance of New York City’s 11th annual Immigrant Heritage Week, April 17-April 24, which celebrates the contributions of New York City’s diverse immigrant communities, Tropicalfete Inc, a non profit Caribbean cultural arts organization, is pleased to announce their multi media program which will highlight the contribution calypso music, created on the island of Trinidad and popularized throughout the Caribbean, has made to New York City’s diverse cultural fabric. Conversely, Tropicalfete will also examine the role New York City has played in calypso’s evolution through the efforts of record labels, concert promoters, artists and entrepreneurs who call New York City their home.
On April 21th, veteran journalist Patricia Meschino and journalist/artist Keran “Fimber” Deterville will start at the beginning, 103 years ago, when the very first calypso record was made, and through a series of articles, songs, and related information, to be published on Tropicalfete.com, various social networks and other media platforms, they will work their way through the decades of the music’s development, offering invaluable conversations about the New York City area record labels that specialized in calypso recordings; the prestigious Manhattan venues such as the Village Vanguard that regularly featured calypso shows; the calypsonians that became big stars in the Big Apple; calypso’s celebrated run on Broadway; the immigration challenges faced by Trinidadian calypsonians at Ellis Island and so much more.
Tropicalfete’s partner in this important endeavor is popular radio personality Trevor Wilkins, host of the “The Trevor Wilkins Calypso Show”, the world’s longest continually running calypso radio program, which has been broadcast since 1997 on WNYE (91.5 FM), a non-commercial radio station operated by the NYC Media Group, a division of the New York City Department of Information, Technology and Telecommunications.
Tropicalfete Inc is proud to present this program for Immigrant Heritage Week 2015, which began on April 17th, which was the day, 108 years ago, when the greatest number of immigrants from sailed into Ellis Island to start new lives in the United States.

Because the calypso story, and New York City’s relationship to that narrative, continues to evolve more than a century after it began, Tropicalfete’s curated segments will extend beyond Immigrant Heritage Week and will run throughout Caribbean American Heritage Month (June) with supplemental programs to be created for broadcast on New York City television and radio stations.
For further information, please email: info@tropicalfete.com