Eco-friendly cruising in Antigua and Barbuda 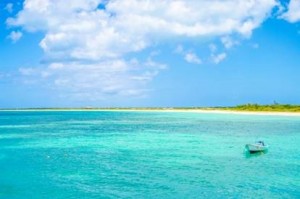 Now is the time to cruise over to Barbuda (Photo Credits: Randy Candy Photography. Provided by The Antigua and Barbuda Tourism Authority)

While Antigua is the more popular of the two, now is the time to cruise over to Antigua’s exclusive sister island Barbuda.
“Barbuda has emerged as a green cruising destination welcoming, smaller luxury cruise lines with discerning cruisers, and this will have a significant impact on the economy of the sister island” says CEO of the Antigua and Barbuda Tourism Authority, Colin C. James.
For the 2014-2015 winter season the island will receive calls from Europa, Ponant, Sea Dream, Club Med, Black Watch, Windsurf and Wind Spirit.
A nature lover’s paradise, the island is filled with experiences that are sure to appeal to eco-aware cruisers. See Barbuda’s unique pink sand beaches, and spectacular 17 mile stretch of pristine, unbroken beach.

The largest Frigate Bird Sanctuary in the western hemisphere, accessible only by boat, the sanctuary contains over 170 species of birds in addition to the more than 5,000 Frigate birds that call Barbuda their home.

Visitors are invited to take a wander through the charming Codrington village, founded in the 16th Century by Christopher Codrington. Explore historic sites, including Highland House, built in the 1720s, by the Codrington Family and Martello Towers, a fort built by the British and once used to guard Barbuda’s south-west coastline.

A must while in Barbuda are the Caves at Two Foot Bay. Visitors on a hike through Barbuda’s Indian Cave, will discover ancient Amerindian petroglyphs.

Anyone who visits this fishing island is invited to sample the local seafood and Barbuda’s famous, spiny lobster.
Those cruising over to Antigua will also have plenty of opportunities to engage in environmentally sustainable excursions.
With a 300 year history, St. John’s, the capital city of Antigua, is full of interesting sites and landmarks, making a walking tour the perfect way for cruisers docking in Heritage Quay or historic Redcliffe Quay, to soak up the history and culture of the town.

Nearby landmarks include the oldest building in St. John’s, the Museum of Antigua and Barbuda, built in 1747 for use as a Court House and the17th century St. John’s Anglican Cathedral.

Travel towards the farmers and craft markets, for locally grown produce and local handicrafts. There, you will find the bust of Antigua and Barbuda’s first Prime Minister and nearby the childhood home of National Hero, and cricketing legend, Sir Vivian Richards. View the Official Residence of the Governor General, the Cenotaph War Memorial, and relax at the Victoria Park Botanical Gardens.

Antigua boasts a host of activities, and port facilities are undergoing major upgrades, allowing Antigua and Barbuda to regain its marquee status as a premier Caribbean cruise destination.