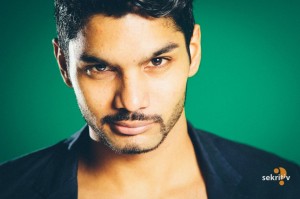 Port-of-Spain, Trinidad ———-A new Chutney star has been born and while he isn’t being boastful about his imminent rise to fame in the Chutney Soca arena, the 23-year-old who has teamed up with Advokit Productions ahead of 2015, is smiling a big, broad smile.

Johnnie will leave a lasting impression on every music lover in the upcoming carnival season in Trinidad and Tobago. His style of delivery has been described by some in the music business, as unforgettable. Having dabbled in rock music in T&T, performing with the band, Bangaseed, the ever-comical artiste knows just what it means to be a people’s performer. With that knowledge of the stage and an indirect sense of humour, it’s no shock that already, every performance of his new single, “Cougar”, leaves audiences calling for more.

The young entertainer whose real name is John Emmanuel, says he has a natural love for the culture of the Caribbean, making it easy to understand why he’s even tried his hand at singing soca parang music. His latest project with Advokit Productions however, promises to lure a strong Chutney Soca fan base with lyrics that speak of his need to find a ‘cougar’(an adult woman who seeks a young man) that can prepare the best roti dish for him- a dish he says he loves. Johnnie’s explanation of the single is enough to make anyone call for a live rendition of the track, something he’s always willing to accommodate.

“I think I’m a really unique performer. I never hold back,” said Johnnie, in describing his style on stage. “I’ve never been afraid to perform,” he confirmed, noting that this Christmas season, he has been confirmed to appear at a few events to sing his 2013 Soca parang single, “Cockset.”

His persona is enough to draw him in and with an energy to create music for all to enjoy, the newcomer to the entertainment limelight, is amped up and ready to deliver. “Cougar” was written by fellow entertainer, Sekon Sta and production was done by the Advokit production house- two entities, Johnnie admitted, had never dabbled in the creation of Chutney Soca music. In the end however, the final product proved that these guys have something special to offer to the genre that makes up a large part of Trinidad and Tobago’s carnival culture. Johnnie says he’s ready for 2015 and he’s telling fans to expect a lot of enjoyment when he hits the stage. “What you don’t see me do on stage, I do in the shower. I’m a great bathroom singer,” he admitted with a laugh.