L3 Magazine Features Tessanne Chin on the Cover of the November, 2014 Issue!

L3 Magazine Features Tessanne Chin
on the Cover of the November, 2014 Issue
Plus
Robert Burchell | Travis Hanson | Freestyle and More!

After winning NBC’s coveted music competition called The Voice, life changed for Tessanne, and we talk to the star about those changes including being in demand daily, making time for family, and reaction to her album sales. Her response to Natasha Von Castle’s interview questions demonstrate hew take on the business of show business in a definitive statement that commands respect.

In addition to Tessanne, Gospel performing artist Robert Burchell speaks to Jennifer Menster about Gospel and its’ impact on people, as well as creating a new category / genre called Inspirational as that is what his music does – inspire! Lastly, Travis Hanson’s illustrations have been enjoyed by people around the world, so in his sit down with Song River, the artist shares his views on art, and alternative ways for artists to raise money to support their dreams.

Our art in focus special looks at the work of Freestyle, who has amassed an impressive gallery of Reggae and Dancehall greats, Photographer Jerome Dupont puts model Stephanie in focus while Beauty Editor Kay Cunningham raves about the best in Lipstick. Travel Editor Stasia Von Castle visits Tanzania and shares several up close and personal experiences of wildlife found in the Ruaha National Park and Frank Deniro showcases his artist to watch!

All of this, plus music charts and a complete list of newest releases compiled by our journalists from around the world are available for all to enjoy in the November, 2014 issue of L3 Magazine via www.L3Magazine.com! 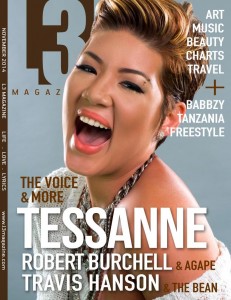