A cinematic event forty years in the making….

Wake the Town and Tell the People – Caribbean on Film in the 1970s
The newly minted territories of the Caribbean navigate local and international political and economic minefields while refashioning their social and cultural landscapes in the turbulent decade of afros, dashikis, guns and embargoes. 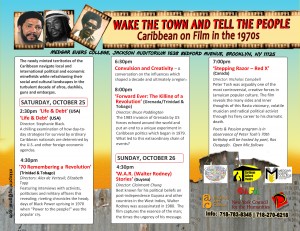 6:30pm: Convulsion and Creativity – A conversation on the issues and influences which shaped a decade, a region and the resulting cultural expression with Pat Belcon, PhD (Trinidad & Tobago), Merle Collins, PhD (Grenada)and others

8:00pm: ‘Forward Ever: The Killing of a Revolution’ (Grenada/Trinidad & Tobago – 113 min). Director: Bruce Paddington
The 1983 invasion of Grenada by US forces echoed around the world and put an end to a unique experiment in Caribbean politics which began in 1979. What led to this extraordinary chain of events?

7:00pm: ‘Stepping Razor – Red X’ (Canada – 103 min)
Peter Tosh was arguably one of the most controversial, creative forces in Jamaican popular culture. The film reveals the many sides and inner thoughts of this Rasta visionary, volatile musician and radical political activist through his fiery career to his dramatic death.