Burt Herrin Unites Music and Influence to Benefit Fed Up with Hunger – A Not For Profit Children’s Organization!

Burt Herrin Unites Music and Influence
to Benefit Fed Up with Hunger
A Not For Profit Children’s Organization!

Burt Herrin unites music with influence through the launch of his new album Lightening Bolt on Tuesday November 11th, 2014 at Kings Plaza to benefit the Not for Profit organization Fed Up with Hunger.

With a very popular name in the music industry in North America, Burt is a seasoned veteran who has worked with several notable artists, and performed on several notable recordings. On November 11th, 2014, Burt gathers friends, fraternity and fans of good music for the launch of his new album Lightening Bolt.

His career has spanned 30 plus years which allowed him to perform for audiences and dignitaries around the world. For the launch of his new album Lightening Bolt, Burt unites well known musicians while liaising with influential members of communities across Jamaica to benefit the charitable organization Fed Up with Hunger.

Founded in 2014 for the purpose of assisting regional and governmental agencies, Fed Up with Hunger’s mission is to raise money to buy and distribute food to the most needy across the country of Jamaica. In addition to meeting the dietary needs of children, the organization will also play a supporting role to single mothers by encouraging them to explore and develop their talents as a means of working out of poverty.

Meeting influential people from all walks of life including music, ministry, politics and business, all agree that hunger and poverty in all countries must be eliminated, and join Burt and Fed Up with Hunger to make that a reality, beginning in Jamaica. “Our goal is to level the playing field for everyone in Jamaica,” said Burt during his recording session at Tuff Gong Studios. “We are in a position to make a difference in all these people’s lives. It is our responsibility and it’s what we must do.”

Support for the album has come from notable personalities being Owen Brown, Isis Miller, Jackie Blackwood, DJ Mike, Ron Muschette and Howard Campbell (writer for the Jamaica Observer). Invited guests to the launch include Phillip Powell, Minister of Technology.

Some of the musicians who contributed to the making of Burt’s album Lightening Bold include legendary Sax player Dean Fraser, as well as Danny Bassie, Kirk Bennett, Wade Johnson and living legend and Reggae historian Bongo Man Herman. Engineering for the album was done by Roland McDermott while production was overseen by Michael ‘Boxy’ Howell. 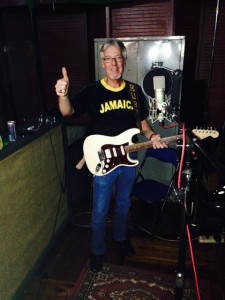