OVER 1.5 Million Downloads / Streams On New Tracks From Upcoming Album! 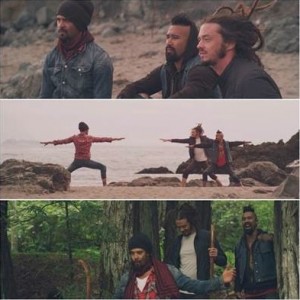 “The transcendental appeal of the Washington, D.C.- based SOJA has as much to do with their simply and traditionally constructed reggae tunes as it does with their universally appealing messages of hope and peace…”–Relix

When creating the concept for the video, Director Jon Jon Augustavo says “’I Believe’ is about finding an appreciation for life and your fellow human again. I wanted to make a video that showed these three guys being stuck in an unideal situation but then finding a certain sense of happiness and oneness with it. I wanted to show them finding peace with each other and just embracing what life gives you.”

“’I Believe’ is about life; being kind to others and making the most out of the time we have with those that surround us,” says lead singer / guitarist Jacob Hemphill. “Whether we are family, friends or strangers, how we treat one another and energy we share dictates our existence.”

The track is off the band’s fifth full-length album Amid the Noise And Haste out August 12, 2014 via ATO Records. “I Believe” along with the rest of the album was produced by multiple GRAMMY award winning Jamaican producer Supa Dups (Bruno Mars, Eminem, Rihanna, John Legend). This is the first full-length album he has chosen to take on in his career. The new album is the follow up to critically acclaimed Strength To Survive which debuted in the Billboard Top 40. Amid The Noise And Haste features special guests including Michael Franti, Damian Marley, and Collie Buddz.

Amid the Noise and Haste reached the #1 album (pre-order) on iTunes Reggae Charts and has 4 songs in the Top 10 iTunes Reggae Charts including the #1 spot with “Easier.”You can pre-order Amid The Noise And Hastenow via the band’s website as well as iTunes and instantly download “Shadow,” “Easier,” “Your Song” and “I Believe” (feat. Michael Franti and Nahko).

SOJA originally formed by a group of friends while still in middle school and has built a massive, dedicated fan base around the world since. In the years following, SOJA has sold more than 250,000 albums, headlined shows in over 20 countries around the world, generated over 3.4 million Facebook fans, and 200+ million YouTube views. The band has toured with Dave Matthews Band, Incubus, 311 and appeared at major festivals including Bonnaroo where they attract an almost Grateful Dead-like international fan base along the way, with caravans of diehards following them from city to city.

SOJA’s Soulshine summer tour kicked off in California and continues in amphitheaters across the country through August. See below for the full routing with Michael Franti & Spearhead, Brett Dennen and Trevor Hall.

The band recently announced THREE album release shows in August: The Hamilton in Washington D.C. on August 12th; Brooklyn Bowl in New York on August 14th; and the Troubadour in Los Angeles on August 19th.Every ticket purchased to any one of the album release shows will include the digital delivery of SOJA’s new album Amid the Noise and Haste plus 5 bonus tracks (18 tracks in total).

For more information on SOJA and the upcoming tour, visit http://sojamusic.com.

Stream and post “I Believe” using the following link: