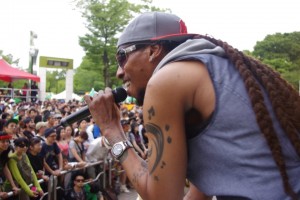 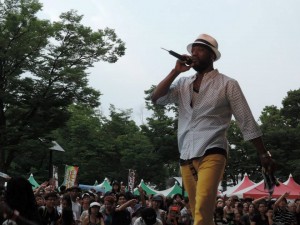 When Reggae musicians David “Catapila” Nevin and Dennis “Shango Trex” Llewellyn embarked on their individual music careers, they never imagined one day they would evolve into the duo, music lovers would come to know as Freemynz. Stemming from a need to be open minded, and being totally oblivious to society’s ‘box’ mentally…Freemynz (pronounced free minds) was born.

Hailing from New York by way of Kingston, Jamaica, Shango Trex has been on the music scene for decades. An expert musician who mastered the trumpet at an early age, Shango Trex also played for The National Cadet Orchestra in Jamaica. Starting out like most performers singing in the church choir, this musician would soon bring to fruition his passion for music as a professional performer.

Also a native Jamaican, David “Catapila” Nevin was born in the parish of St Thomas. Much like Shango Trex, Catapilla has also been on the reggae music scene for decades. A professional drummer who harnessed his craft in local churches, Catapila started out playing the acoustic guitar. With no passion for the instrument, however, Catapila wasted no time in moving on to the pastime he loved, drumming. That pastime developed into a profession, and before long, Catapila was playing at hotels in Ocho Rios, located on Jamaica’s fabulous North Coast on a regular basis.

Playing with the Riddim Force Band early in his career, Catapila was eventually offered a one year contract, with the band to play in Japan. This was a big break Catapila had long desired, and seized the opportunity quickly. “I was now able to spread the joy of reggae music, inspirational music to the people of Japan.” After going back and forth from Japan to Jamaica, for years, Catapila who speaks fluent Japanese, has been calling Japan his second home now for the past few years.

Shango Trex also carried on his pursuit towards fulfilling his dream as a singer and musician, and recorded various tracks for producers such as Avex Trax and others. Shango in an interview admits he had no plans of becoming a musician. His dream was to become an Electrical Engineer. Music seemed to be his destiny however, and one can never outrun what is meant to be. Shango Trex migrated from Kingston, Jamaica and headed to New York City in 2003. During that time he ventured to Mexico, London, and Japan, before returning to New York City where he now resides.

What is meant to be will always be as the saying goes. Simply keep your mind free and be open to pleasant surprises. It was no accident that Shango Trex and Catapila met in Tokyo, Japan while both were on tour in the early nineties. After forming an immediate bond of friendship and brotherhood, the two decided to form Freemynz in 2013. They seemed destined to work as a duo, because no matter the distance geographically, these two musical giants always wound up performing in the same clubs, and bands in and around Japan. They were each recording for separate labels, but often times collaborated on each others’ projects.“
The duo was born last year after working on some projects together. “Rise & Shine” and a cover version of Billy Ocean’s “Caribbean Queen” were two ventures we teamed up on. Forming a duo was something we had often discussed over the years, so it has been forthcoming,” stated Shango.

The “Rise & Shine” charity project came about after the horrific earthquake which ravaged Japan in March 2011. Having such close ties to Japan, Shango Trex & Catapila felt the need to lend a helping hand to the people and area affected by the disaster. They decided to lend their talents, their most valuable assets, and the “Rise & Shine” project was born.

The track “Rise & Shine” was written by Dennis “Shango Trex” Llewellyn & David “Catapila’ Nevin. It was produced and arranged by Takayoshi “Edison” Watanabe, Shango Trex and Catapila. The song was released and distributed by “19 Box” (Duke Box) Label in Japan in March 2013, on the two year anniversary of the earthquake.

The name ‘Freemynz’ was inspired by the duos ability to ‘express one’s thoughts through lyrics’. “Free up your minds and live, so that your light can shine throughout the universe.” Freemynz is the only word which can define Shango Trex and Catapila’s musical works as a duo. With both parties being multi-talented, this duo is a force to be reckoned with. Both members play instruments, sing, toast, write, produce and arrange.

As a duo, Freemynz will be growing from “strength to strength” with the support of their team. They are currently working on an EP, and the first single “That Rush”, will be released this summer to officially launch the duo. The video for this crossover/pop single will be shot on location in Japan. Fans can also look forward to a small promotional tour in Japan to promote the EP.
Fun, uplifting, and inspirational vibes is what Freemynz delivers. They are not messengers, they’re not a brand, they’re just two extremely talented musicians determined to encourage others to cultivate their own thoughts and ideas, thus freeing their minds.