Following the announcement of its first wave of programming unveiled last month, confirming the participation of Maxi Priest, Sanchez, Marcia Griffiths and Percy Sledge, the Montreal International Reggae Festival is proud to confirm the participation of three other major stars of Jamaican music: Sean Paul, I-Octane and Demarco.

Collin “Demarco” Edwards embodies a new era of avant-garde artists combining songwriting, music production, recording and live performance. Over the past five years Demarco has delivered a solid string of memorable hits, such as Duppy Know Ah Who Frighten, Fallen Soldiers, True Friend and Show It (So Sexy).

For the past two years in Jamaica, you can see and hear I-Octane everywhere! The handsome young singer with the sweet, warm voice has been recruited as a spokesperson for Digicel, Busta beverages and Guinness beer. Discovered by brilliant producer Donovan Germaine (Penthouse Records), I-Octane has been touring constantly on the international concert scene since the release of his debut album Crying To The Nation, a record fusing roots reggae and dancehall at its purest, including the two huge hits L.O.V.E.Y.O.U. and Missing You. This will be I-Octane‘s very first appearance at the Montreal International Reggae festival and is not to be missed!

The festival is also very proud to have the great Sean Paul headline its’ Saturday evening. With the release of his sixth album Full Frequency this year, featuring the radio crossover hits Other Side of Love, Entertainment, Turn It Up and Want Dem All, the dancehall superstar is back, more in-demand than ever. Since that major release, he has worked on projects with Major Lazer (Apocalypse Soon), Pharrell Williams and Nigerian singer Timaya.

For a second consecutive year, the Montreal International Reggae Festival’s innovative series of workshops and conferences will return to O Patro Vys on August 12, 13 and 14. The programming and complete schedule of these events, as well as new confirmations of additional performers and headliners will be announced at a press conference at O Patro Vys (356 Mont- Royal Street E) on Monday, July 14, at 11 A.M. in the company of a very distinguished international guest. 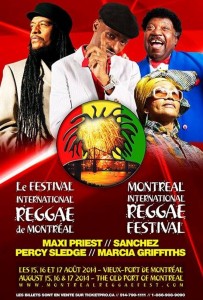