Trinidad & Tobago To Move From 'Red Tape To Red Carpet'

NEW YORK, NY – Trinidad & Tobago has created an enabling environment for foreign direct investment and will be moving from “red tape to red carpet.”

That’s the word from the twin-island Republic’s Minister of Trade, Industry, Investment and Communications, Senator Vasant Bharath, who put the spotlight on his country at the 2014 Invest Caribbean Now summit in New York City on June 4th.

Bharath said his country has cut the time to start a business from 43 days to three days and sliced the verification of address process to 24 hours as part of its “Easy doing Business” initiative.

He revealed that his country’s reserves have doubled to $5 billion and unemployment has declined to five percent. A bond offering in London last year was oversubscribed by a multiple of 10. Four hundred foreign firms operate in the country, including Microsoft, General Electric and BP, using Trinidad as regional headquarters. Location on “Brazil’s doorstep” means that the government is diversifying beyond oil and gas and is now pursuing financial services, tourism and maritime services. A 700-acre economic zone is also being developed.

Additionally, the first half of the event included an opening address by ICN founder and chairman, Felicia J. Persaud; a keynote address by Harvard graduate Dr. Isaac J. Newton, of Paramount Communications Consultancy; an investment announcement on the Caribbean Market Village of St. Lucia and a focus on ‘Advancing Wealth In The Caribbean With Technology,’ from Trinidad-born, LA resident, Anthony Wellington Phills, branding specialist of Disney’s ‘Million Dollar Arm’ and founder of Caribbean Commerce Magazine/Media, Calypso Cloud and Blinglet Inc. 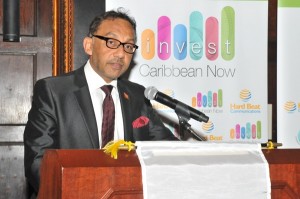