New York, New York – The dancehall star who is currently wrapping up his 2014 first quarter US college tour is set to perform at this prestigious festival with his recently signed band, ‘Di Blueprint’. Konshens seemed poised to live up to his expectations as he stated that “fans can expect to enjoy not only a stellar performance, but will be given a show to watch when i am onstage”. This will be the first time New York will see Konshens perform with his own live backing band, ‘Di Blueprint’, setting the stage for a performance to remember; he stated, ‘this a go be the first time mi perform inna New York with my own band..New York, get ready”. And New York seems to be ready as the Buzz about Konshens being on the show has spread like wild fire across the tri-state and beyond.

Konshens seemed to be quite the sort after image as he has been recently aligned with Pepsi Jamaica and LIME Jamaica as the brand ambassador for both companies, an achievement very few dancehall artists has obtained. “The recent endorsement deals with Pepsi and LIME have been good so far, both companies have treated me like family and I can see prosperous relationships in the making, this is a milestone for me and i will embrace it to the fullest” said Konshens.

Among his most recent milestones, Konshens appeared and performed on the Arsenio Hall show with Grammy award winner Sean Paul; he also recently launched his sneakers line, Konz876, which is doing well. About future plans, the artist mentioned that he is currently working on his sophomore solo album ‘Hotel Room’, a project the artist mentioned he is very excited about.

Among the performers on Oracabessa Festival are Agent Sasco, Beenie man, and Tessanne Chin, winner of season 5 NBC’s ‘the Voice’. One lucky ticket buyer for the festival will have the opportunity to win a pair of Konz876 sneakers. 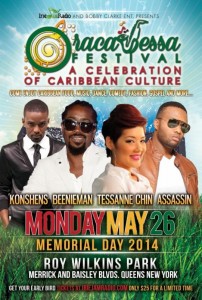