Posted On May 30, 2014 By alton In Film-News, Interviews, Merchandise, Music Reviews, Music-News Radio, News With 1481 Views

Brooklyn, NY, April 17, 2014 – On Saturday, May 17, 2014 at 12pm, Community2Community (C2C), the Brooklyn-based nonprofit, service organization working with communities in Haïti to achieve self-sufficiency, will kick off its 4th Annual “Hope and A Future” – A Celebration of Haïti at the Christian Cultural Center (CCC) Campus, 12020 Flatlands Avenue in Brooklyn, NY.

Prior to the “Story of the Trees” production, the campus of CCC will transform into the C2C Ayiti Marché at 12pm to bring local, national and international businesses and organizations together for a cultural exchange of information, services and products to the Caribbean and surrounding communities. Attendees will partake in the tastes and sounds of Haïti, while exploring Haïti’s rich artistic and cultural contributions through various artisans and exhibitors. Festive Haitian music, raffles, giveaways, etc. will occur throughout the Marché. Radio personality, Barbara De Laleu and surprise guests will host the C2C Ayiti Marché.

Proceeds from the 4th Annual “Hope and A Future” – A Celebration of Haïti will help complete the C2C Water Initiative and promote environmental stabilization in Petit Goâve, Haïti. C2C and its mountainside Partner Community launched the C2C Water Initiative in April 2011, building a gravity-fed water distribution system that currently provides access to water for the entire community. Due to the rapidly deteriorating environmental conditions at the site of the water source, C2C and their project partner Pinchina Consulting responded by implementing an environmental stabilization plan in 2013 to protect the investments made thus far. This stabilization plan began with the community planting 14,000 seedlings to slow down the massive deforestation and soil erosion around the water source.

Now in 2014, C2C is looking to move toward the completion of the Water Initiative by breaking ground on the final phase. The most expensive and labor-intensive component of the initiative: the installation of a distribution system that will bring the water to several communities, rather than having them walk miles to the original source each day.

“Clean water continues to be a primary challenge in Haïti. Along with that, is the need to understand the indisputable role the environment and the trees play in preserving and upholding the country’s water sources,” said C2C CEO + FireStarter Marie-Yolaine Eusebe. 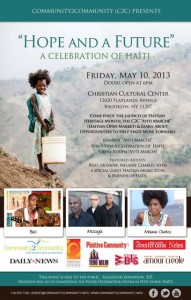