The Montreal International Reggae Festival (MIRF) has released a partial look at their 2014 line up which combines classic Lover’s Rock with Soul,and is forecasted to make Montreal the most popular Canadian city forAugust, 2014!

Taking place at the scenic Montreal Old Port, organizers from Canada’s most acclaimed Reggae festival have shared with media and fans 4 of the 12 headlining artists who will be performing at the 11th annual festivities, offering patrons the right musical mix and value for their dollar.

On the heels of the release of his new album, *Maxi Priest* will take center stage to rock classics as well as some of his new singles “Easy to Love” (lead single from his new album of the same name), and “Every Little Thing.” The Grammy Award winning, and Billboard chart topping artist is excited to be performing in the city.

The Queen of Reggae, *Marcia Griffiths* will endear fans with her sweet voice that has created so many memories. Getting her start with the I-Threes who famously backed Bob Marley & The Wailers, Ms. Griffith now celebrates 50 years in the music industry and Montreal can’t wait to do the “Electric Slide” in her honor and classics such as “I Shall Sing” and “Dreamland!”

After an outstanding performance in 2009, *Sanchez* will return to the MIRF stage giving the city his unique mix of Gospel, Lover’s Rock and some Pop Reggae such as his new song “Him Buy You a Drink” which has been gaining traction on the Canadian Reggae landscape.

Soul has always been embraced by Reggae fans, so to sweeten the mix, MIRF brings legend *Percy Sledge*! One of the most beloved American artists, Percy’s single “When a Man Loves a Woman” became an international top 40 hit and certified gold record. Additional hits include “Warm and Tender Love,” and “Take Time to Know Her.” Early bird tickets are available via www.ticketpro.ca with prices ranging from $80 CA for a weekend pass (if purchased between May 8th and June 2nd, 2014).

The complete 2014 lineup will be announced at a press conference to be held on June 14th at O Patro Vys – 356 Mont Royal St. East at 11am. In addition to performances, MIRF will offer workshops at O Patro Vys on August 12th, 13th and 14th. 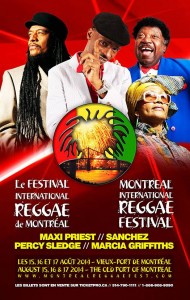