Posted On May 28, 2014 By alton In Competitions, Fashion, Film-News, Interviews, Music Reviews, News With 751 Views

New York: Five months after Jamaican songbird Tessanne Chin beat out Wil Champlin and Christina Aguilera’s 16 year old protege Jacquie Lee to win season 5 of The Voice, tri-state area music fans will get the opportunity to see her perform live in concert on Memorial Monday, May 26, 2014 when she headlines the first annual Oracabessa Festival at Roy Wilkins Park in Queens, NY. Other performers include Beenieman, Konshens and Assassin.

“We are thrilled to have Tessanne perform live in New York for the very first time since she won The Voice” said event organizer Bobby Clarke, CEO of Irie Jam radio. “Her performance is expected to attract large support from her Jamaican/Caribbean fan base as well as garner mainstream attention” Clarke noted.

Tessanne’s march to victory on the Voice included an emotional rendition of Simon & Garfunkel’s “Bridge Over Troubled Water” which earned her the #1 spot on iTunes USA Top 100 charts and a mesmerizing rendition of Bob Marley’s “Redemption Song.” She also topped the iTunes singles chart with “I Have Nothing” and cracked the top ten singles chart again with her duet with Adam Levine, The Beatles “Let It Be.”

Since appearing on the Voice, the “Hideaway” singer has been a regular fixture on American television. She was interviewed by Matt Lauer of NBC’s Today Show. She appeared on the Kathie Lee & Hoda show, Live with Kelly & Michael, Access Hollywood and New York Live. Just last week she returned to the NBC Voice stage, delivering a spirited rendition of her debut single “Everything Reminds Me of You,” from her soon to be released album. 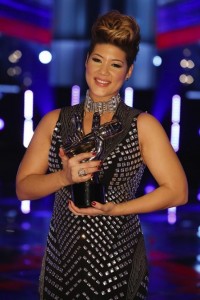