Posted On May 15, 2014 By alton In Music Reviews, Music-News Radio, News, Program Related With 780 Views

New York, New York – The Premier reggae fusion label, Ranch Entertainment, which was launched in 2011, has released another riddim titled ‘Heaven Bless’. Over the past month, the streets and underground radio stations worldwide, have been buzzing about the ‘fire’ this new riddim is bringing to the dances. Well its here for us all to listen now.

Each tune holding their own place in the hearts of sound men and radio disc jocs, RSNY tune ‘Mek Wi Blaze It’ is being said to be the Rock Stars huge banger out the gate for 2014. Radio disc Joc and icon David Radigan of BBC radio, states that RSNY ‘Mek Wi Blaze it’ is a wicked track and is currently receiving solid airplay on BBC radio.

Red Fox ‘The Night Shift’ definitely gives you the original dancehall vibe when couples would dance together while enjoying themselves. Screechy Dan and Johnny Osbourne ‘My Sound Stand Alone’ is surely the sound man favorite. Starting out with Johnny Osbourne signature voice singing- ‘Murder, Murder was the case that they gave me’ immediately received the salutes of sound men worldwide.

Then Screechy Dan comes in and seals it with his lyrical skills forcing many sound men to make sure this tune is in their dub box. Jimmy Cozier and Melissa Musique ‘You Could Be My Lover’ is a classic tune, both singers get you in the lovers rock mood. Yet, the Agent Sasco ‘Mix Up’ seems to be the tune that is currently getting the forwards in any dance you walk into lately. With constant rotation on the major Caribbean and urban radio mix shows Agent Sasco ‘Mix Up’ is definitely a favorite for the summer.

No need to take my word, take a listen for yourself and make sure you are requesting your favorite single (s) from your local radio DJs.

HEAVEN BLESS
1.The Mix Up – Assassin aka Agent Sasco
2.Vex If Yuh Wa Vex – Shaggy
3.You Could Be My Lover – Jimmy Cozier & Melissa Musique
4.Mek Wi Blaze It Up – RSNY
5.The Night Shift – Red Fox
6.My Sound Stands Alone – Screechy Dan & Johnny Osbourne
7.Loving That You Like – Shaki 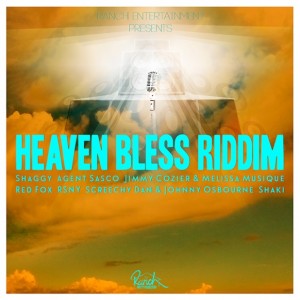