As the eldest son of Stephen Marley and grandson of Bob Marley, Jo Mersa is set to release his debut EP Comfortable on June 10, 2014 on the Marley family’s imprint Ghetto Youths International (GYI).

Jo is currently on the road performing the entire Comfortable EP as the opening act on Stephen Marley’s Revelation Part II: The Fruit of Life Tour. The tour spans over 30 cities in the United States and concludes in New Orleans, LA on May 24. See full schedule below.

Jo’s Comfortable spans pop, hip hop, EDM and dancehall influences while showcasing his deft vocals, clever songwriting and flourishing production skiills. Each of the EP’s riddims (except for “Bogus” which was produced by his uncle Damian Marley) were created by Jo, working alongside his father’s keyboard player Llamar “Riff Raff” Brown, with Stephen Marley handling the final productions. Many of the EP’s songs focus on Jo’s personal experience with women and their complex relationships. On the sleek electro-dancehall hybrid title track, which is also accompanied with a video, he cleverly rhymes about a budding relationship contrasted by his sweetly sung hook. On “Bogus,” he addresses a lack of sincerity in some women, while club-friendly tunes like “Bad So,” All To Me” and “Perfect 10” ft. Jemere Morgan deliver romance with a rude boy twist. On the EP’s first single “Sunshine,” Jo nimbly rhymes over a bubbling dancehall rhythm embellished by gentle guitar strands. Jo came up with “Sunshine’s” melodic hook while singing to his baby sister and is one of the EP’s most intimate songs.

Check out the joint premiere of “Sunshine” on Complex and Boomshots.

Joseph “Jo Mersa” Marley grew up surrounded by music. By the time he was four years old, Jo was appearing onstage alongside his father, his uncle Ziggy and aunts Cedella and Sharon (a.k.a. Ziggy Marley and The Melody Makers) and their children as part of the group’s rousing concert finales with Jo often taking the mic and chanting the lyrics to the Melody Makers’ biggest songs. Born in Kingston, Jamaica on March 12, 1991, Jo moved to Miami at age 11 where he keenly observed his father and his uncle Damian as they created music in Stephen’s Lion’s Den studio. Back then school was the priority for Jo; traveling with Ziggy and the Melody Makers was reserved for school breaks and summer vacations, yet those experiences provided first hand opportunities for Jo to expand his musical aspirations beyond the performance stage. He started making beats when he was about 11 and then began focusing on his songwriting and vocal delivery.

As Jo career progresses, he looks forward to making his mark as an individual artist while continuing the Marley musical legacy. “My father calls my grandfather a magician because he was the only man who could bring peace to his country (during Jamaica’s deadly political skirmishes of the 1970s) and that’s a lot of power, influence, it’s magic, but I don’t let it get to my head,” Jo declares. “He made a big step for Jamaican music and it is time for me to add my works to it, to build on it. I am just getting started; I am just getting Comfortable.” 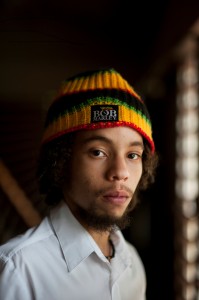