Posted On May 14, 2014 By alton In Music Reviews, Music-News Radio, News, Program Related With 716 Views

New York, New York (May 5, 2014) – Each generation need its herald, a voice for the people, shedding light on the issues that touch the common man. DASECA Productions recording artist Bugle is that voice and is set to release his debut album titled ‘Anointed’ on Tuesday May 6, 2014. The 16-track collection produced primarily by Craig & David Harrisingh and Roy Thomas for Daseca Productions will be released on the DASECA Productions/Zojak World Wide imprint.

Known for his timeless lyrics and songs, which evoke the mind and hearts of listeners, Bugle easily stands out in the very crowded dancehall fraternity. Launching his career in 2007 when he met DASECA the journey took him to where he is today, ‘Anointed’. Bugle’s debut album is a representation of life, with some social commentary songs, a blend of reggae and dancehall along with collaborations from some of the industries A- List artists; Julian Marley, Tarrus Riley, Alaine, Popcaan, Lady Saw and I-Octane, which gives you an idea of the diversity of the album. His delivery and lyrical content gives each track their own spotlight and strength to resonate in the hearts and minds of the listeners.

Lead single “Nuh Compatible”, released late last year is currently receiving heavy rotation on national and international radio. With heavy rotation on stations like Sirius XM, it is evident that Bugle is here to stay. Opening the album with “Reflection” you get the chance to hear the powerful message to persevere despite the negative people of your past and any situation you may find yourself in. Accompanied by the rhythmic beat and strong presence of drums, Bugle tugs at the hearts of his listeners while giving them a sense of ‘no one can stop me’.

There are many highlights on ‘Anointed’; Track number 15, ‘Only Human’, features, Tarrus Riley, Alaine, and Popcaan. This track shows the dynamic unity and magnificent production of a track with multiple talents from different genres. Then you have “Pain & Suffering” featuring dancehall artist I-Octane, which brings a great balance of melodic tone from both artists. The title track ‘Anointed’ is currently playing and building momentum throughout the national and international market. The track speaks for the triumph, laid back persona and journey of Bugle, which despite what is said he stays focused on his mission. The entire album gives you a sense of encouragement, upliftment and empowerment.

Pre-order Bugle’s debut album ‘Anointed’ which is set to release on Tuesday, May 6, 2014. 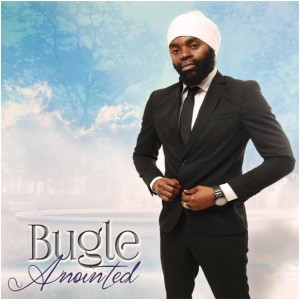