L3 Magazine closes the month of April, 2014 with the biggest highlights in Caribbean and Urban news and entertainment, and does so with the help of Ziggy Marley, Michele Henderson, Sophia Stewart and Vince Lozano!

Ziggy Marley is flying high with the release of his new album Fly Rasta which impacted the iTunes charts at #1. Fans agree that the album is another great and classic, but what does Ziggy think, and how did he implement his Father, Bob Marley’s standards on the album? Natasha Von Castle gets the answers!

Michele Henderson is from Dominica, and is recognized as one of the most famous flautists! She has performed on several notable stages around the world, and is one of the few people who practices Scientology in her country. Is that of any significance?! Our journalist Ayeola George asks about this and more.

No one has impacted Sci-Fi on a global scale as much as Sophia Stewart has. Creator of Terminator and the Matrix, Sophia is famous for both film franchises, as well as for the historic judgment she was awarded when her material was used without permission. Jennifer Menster sits down with the living oracle to understand how the lawsuit came about, and where she is now.

Vince Lozano is a famous actor in Hollywood whose role as Jacoby in Pirates of the Caribbean and the television series Dads were most popular. The actor’s newest film project, Acts of Desperation is receiving a lot of attention, and L3’s Song River gets the exclusive scoop.

In addition to feature interviews, this month offers Beauty Tips from Kay Cunningham, the art of Gerald McDermott, an inspirational word from Dr. Cheryl Hill, highlights from the Web Series Dear Jesus, model of the month and so much more! 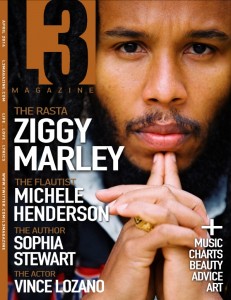