As the eldest son of Stephen Marley and grandson of Bob Marley, Joseph “Jo Mersa” Marley is set to release his debut EP Comfortable, due in Spring 2014 on the Marley family’s imprint Ghetto Youths International (GYI). Jo grew up surrounded by music. By the time he was four years old, Jo was appearing onstage alongside his father, his uncle Ziggy and aunts Cedella and Sharon (a.k.a. Ziggy Marley and The Melody Makers) and their children as part of the group’s rousing concert finales with Jo often taking the mic and chanting the lyrics to the Melody Makers’ biggest songs. Born in Kingston, Jamaica on March 12, 1991, Jo moved to Miami at age 11 where he keenly observed his father and his uncle Damian as they created music in Stephen’s Lion’s Den studio. Back then school was the priority for Jo; traveling with Ziggy and the Melody Makers was reserved for school breaks and summer vacations, yet those experiences provided first hand opportunities for Jo to expand his musical aspirations beyond the performance stage. He started making beats when he was about 11 and then began focusing on his songwriting and vocal delivery. His latest Comfortable EP spans pop, hip hop, EDM and dancehall influences while showcasing his deft vocals, clever songwriting and flourishing production skills. Each of the EP’s riddims (except for “Bogus” which was produced by his uncle Damian Marley) were created by Jo, working alongside his father’s keyboard player Llamar “Riff Raff” Brown, with Stephen Marley handling the final productions. 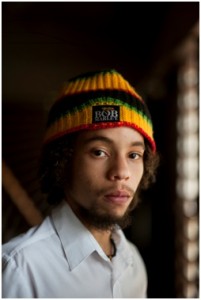