Jamelody Goes Against The Grain With 'Gun'

Port-of-Spain, Trinidad – Gun. A word that immediately triggers fear in some but for the youths on the street, the youths in the crime hotspots in Trinidad and Tobago and many other countries across the world, gun talk is real talk. ‘Gun’ is the name of T&T reggae crooner and VP recording artiste, Jamelody’s latest contribution. The simple yet strong song-title is meant to draw attention to the lyrics embedded in the track- draw attention to what he wants the masses to hear.

Unlike the traditional soothing and melodic vocals many have come to know the artiste for, this single, produced by Pengco Music’s Randal Alexander, takes on a completely different energy, an energy that symbolizes his versatility as an entertainer no doubt. More along the lines of a chant, Jamelody’s raspy tone accentuates the lyrics, which speak of the gun in quite the metaphorical sense.

In the past few years, Jamelody has proven quite capable of holding his own. As a Trinidad and Tobago reggae artiste, he has earned the respect of many reggae heavyweights and producers in Jamaica. Over the years, he has also delivered several memorable reggae anthems, among them, ‘Pressure,’ ‘Love Crazy’, ‘I Wanna Love You’ and ‘Special To Me.’ He has wowed audiences in and out of T&T, in turn proving that he is capable of standing erect on any international stage.

This time around, Carenage, Trinidad native Michael ‘Jamelody’ Williams is making a very strong statement and having teamed up with one of Trinidad’s renowned producers, he is certainly expected to cause a stir in the coming weeks. The track is scheduled for release this week. According to Pengo Music’s, Randal Alexander, there are several other projects in the pipeline between Jamelody and Pengco Music. He says the work has only just begun and assures the products delivered will be impressive.

The song is yet another musical articulation of the feelings many people have regarding life and the violent situations that are becoming the norm. In his single, Jamelody says his gun is the spiritual gun, a gun that won’t aid in shedding blood but rather one that will save lives and deliver knowledge and wisdom. 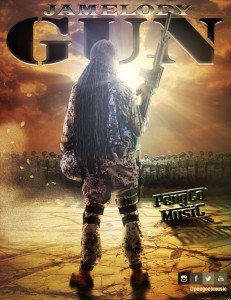