On Saturday, March 29th reggae artists Exco Levi and Kabaka Pyramid won the prestigious Canadian Juno Award for Best Reggae Recording of the Year, which was a collaboration with the three time Juno award winner Exco Levi for the single ‘Strive’. ‘Strive’ produced by Silly Walks, on the Honey Pot Riddim talks about striving and never allowing anyone or anything to get you down.

“Its an honour to be recognized for the works we do and the positive music we continue to put out. I thank the fans and the committee of the Juno Awards” says Kabaka Pyramid.

With only four months into 2014 Kabaka Pyramid has received several awards and global recognition and is set to embark on his European tour. Commencing in Prague on April 9th, Kabaka Pyramid will be in Europe for over five weeks performing in several cities; Vienna, Andorra, Munich,Dortmund, London, Zurich, Oslo and Bordeaux, just to name a few.

“We give thanks for the opportunity to travel and spread the music. The “Lead the Way Tour” will be a great vibration and the european fans will get a chance to see the growth in Kabaka Pyramid’s career says Abishai Hoilett of The Bebble Rock Management Team.

Following his European Tour Kabaka Pyramid is set to embark on his U.S. East coast tour. 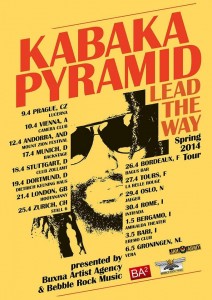