Last week Friday Guinness launched its latest under the crown promotion “Arthur Guinness Day- made of more!” during the Gros Islet Friday night street party. The promotion runs between September–October 2013.

This latest “UTC” affords persons purchasing Guinness chances to win some fantastic prizes and to be a part of Arthur Day celebrations in Ireland and here at home. During the promotions special edition Arthur Guinness day bottles will be capped with special marked crowns which will reveal various prizes. These include instant prizes such as free Guinness, cash and merchandize as well as LED Smart TVs, Ipads, IPods, Mobile smart phones and Beats by Dr. Dre headphones.

At Fridays launch, one individual was quite lucky and won a very popular item. Shem Sinaise of Vieux Fort, won himself an IPAD 3 Mini which he collected from Guinness brand manager Sylvester Henry at the WLBL office on Monday.

According to Henry this is an exciting promotion, which will include the celebration of Arthur Day on September 26, a major concert on September 29 and lots of prizes to be won throughout September and October.

“We have the instant prizes that winners can collect right away, prizes that can be collected at WLBL, and we will also be affording persons the opportunity to attend our own Guinness concert,” Henry says. “This concert will be held on Sunday September 29 at Fond D’or and will feature Jamaican dancehall act RDX as well as a number of Saint Lucian performers,” the Guinness brand manager says.

However the main prize of the “are you made of more?” promotion is an all expense paid trip for two winners to the Guinness storehouse at St James gate Brewery in Dublin, Ireland. The winners will get the opportunity to taste a variety of Guinness as well as soak in the rich history and culture of Dublin and the brewery itself. And of course, this will all be done as the world hoist their glasses and toast the brew Guinness and the man that started it all-Arthur Guinness! 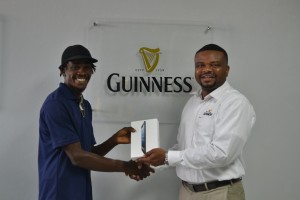