Last weekend the 10th edition of the Montreal International Reggae Festival (MIRF) attained new heights of popularity with a sold out crowd on Saturday night; and Friday and Sunday selling 97% of the total site capacity of 10,000 seats.
The weather was extraordinary, as were the Friday night performances that included Morgan Heritage, making a remarkable return to the MIRF stage for the third time. They performed all their greatest hits as well as extracts from their new album, Here Come the Kings with a dynamic set, despite the absence of Una Morgan, who fell ill after arriving in Montreal. Montreal roots rocking, Inword and energetic DJ Hawkeye had the honor of starting this evening after French Guyanese Chris Combette opened up with smooth and pristine Antillean hinged reggae rifts. 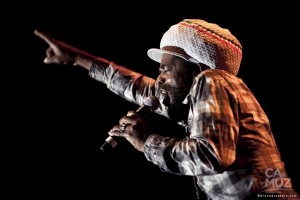 Traditionally known as dancehall night, Saturday featured some of the most relevant artists of the current scene: Toronto’s Dahlia; Dancehall Diva Tifa; Mr Vegas – performing his hits of the past fifteen years; Kes The Band – who brought out many of Montreal’s Eastern Caribbean revelers; Shaggy in top form and the electrifying Beenie Man. As mentioned by Howard “Stretch” Carr, MIRF emcee and host of West Indian Riddims on CKUT 90 3 FM, MIRF attracted an extraordinary number of visitors this year from as far as South America and the United Kingdom. CKUT 90.3 FM broadcasted live from the MIRF site for the entire Saturday evening and again on Sunday, bringing its listeners two hours of MIRF including the Yellowman set – during Bhum Bhum Tyme with hosts Pat Dillon-Moore and JD who were also MIRF emcees.
Toronto’s Visionary and Montreal’s Jah Cutta and the Determination Band opened up on Sunday with thrilling and well received performances. Accompanied by the famous Sagittarius Band, the legendary DJ Yellowman gave a lively set, setting a high bar for young sensation Serani and singer Alaine. These opening acts warmed up the crowd in the early evening and the atmosphere was then perfect for the downright magical performance of Cocoa Tea.

Freddie McGregor and his Big Ship crew closed the 10th edition of MIRF in fine style. Festival goers were roused once again, as soon as Freddie McGregor’s band started playing their instrumental medley – joined by the sweet voice of their veteran leader who performed his repertoire of classic ska as well as songs from his recent album, Di Captain. The only downside this year was the cancellation of Luciano’s scheduled appearance at MIRF following a visa problem that was beyond the control of MIRF.

The MIRF team would like to thank its partners, sponsors and the media for this edition of unprecedented success. See you next year!

Quotes from some of our guests include “Surely one of the best reggae festivals in North America, comparable to the venerable Reggae on The River, California” Roger Steffens, and “The Montreal International Reggae Festival truly came of age in 2013, with a stellar line-up. What I enjoyed most were the festival’s new free workshop series that included the wonderful three-hour multi-media presentation “The Internationalization of Reggae” by the world’s foremost reggae historian, Roger Steffens. This year’s festival was educational as well as entertaining, and the jerk chicken sold on-site was pretty damn good too! In 2013 the Montreal International Reggae Festival graduated to the ranks of the world’s great reggae festivals,” Richard “Bugs” Burnett, The Montreal Gazette!